Is the Rogers Centre getting new turf for the 2014 Blue Jays season?

Share All sharing options for: Is the Rogers Centre getting new turf for the 2014 Blue Jays season?

Just spoke to Paul Beeston. There are plans to upgrade the turf for the upcoming @BlueJays season before grass goes in in 2018.

@Minor_Leaguer @bnicholsonsmith he referred to grass installation as "not a joke"... Also said new turf going in this season

Generally, during the annual State of the Franchise event, the Blue Jays would re-assemble the entire baseball field as a backdrop; however, fans attending the event just found bare concrete and spindles of turf. Could this be a hint of some sort of upcoming change?

The idea of installing an interim turf surface before grass is eventually planted was first mentioned by general manager Alex Anthopoulos at the Buffalo Bisons Hot Stove Luncheon back on January 16, although he seemed less-than-certain about when such plans will roll out, saying that "in a year or two maybe we'll have new turf, but again, it hasn't been finalized."

It is unsure whether the "upgrades" Paul Beeston was speaking about referred to a brand new turf, or just replacement of certain portions of it.

Beeston also told the fans that, unlike the design at Tampa Bay's Tropicana Field, the new turf will continue to not have a dirt infield in order to expedite the field conversion from baseball to football (and back). One of the two fans, @GTAdross, spoke with Beeston last year as well and broke the news that Windows Restaurant was being renovated into a centre field porch for fans to hang out on. Of course, that turned out to be true and it certainly was a great new addition for the fans, allowing those with upper deck tickets to watch the game from a lower perspective. 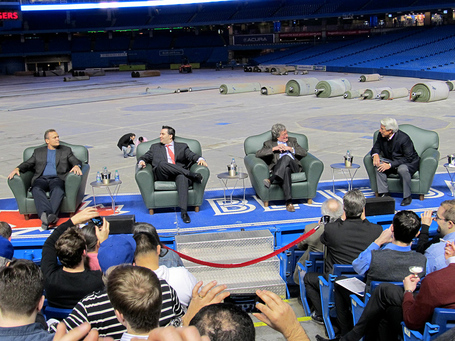 John Gibbons, Alex Anthopoulos, and Paul Beeston answering fans' questions on top of the Blue Jays dugout in front of a concrete field with rolls of artificial turf; probably not an homage to the Canadian prairie landscape. (Photo from Inimitable Appurtenances, used with permission.)

Last year, Beeston mentioned that Rogers had committed to spend $250 million in retrofits and renovations through the next decade--ten times what the company paid to buy the property. The bulk of that cost would probably be devoted to the installation of a grass field, which will require a tremendous amount of science and engineering, from selecting a species of grass that will grow indoors to moving the seats to installing a new ventilation system to lowering the concrete floor of the stadium in order to install a drainage system and a thick layer of soil. However, the Rogers Centre's commitment to the 2015 Pan Am Games and the Toronto Argonauts (and monster truck rallies?) means grass will not be installed until at least the 2018 season.

In baseball during the past two decades, there has been a major cultural shift away from artificial surfaces back to natural grass, which is believed to be more aesthetically-pleasing, more traditional, and better for players' health. Just to show how much has changed since 1989, 10 out of the 26 major league stadiums had turf when the SkyDome opened (Astrodome, Busch Stadium, Riverfront Stadium, Three Rivers Stadium, Veterans Stadium, Kauffman Stadium, Kingdome, Olympic Stadium, Metrodome, SkyDome), but right now only two out of 30 do (Rogers Centre, Tropicana Field). Even Paul Beeston, whose ballclub has played on artificial turf since its founding in 1977, is now fully committed to putting in grass in the Rogers Centre, telling Richard Griffin that "the game of baseball is played on grass [...] we’re going away from the turf and onto the grass."

Meanwhile, the current turf looks painfully atrocious, and probably isn't much better to play on either (it "freaked out" Emilio Bonifacio, apparently). The playing surface, officially called "AstroTurf Gameday 3D", is actually just three-years-old but it has aged very quickly, especially the centre strip which is shared with the Argonauts and the Buffalo Bills. The seams and the wrinkles from the storage process are very obvious, football yard markings are faintly visible, and there's something about that satin-like sheen that makes it look especially horrible.

In 2010 AstroTurf had offered the Blue Jays a large discount to install the GameDay 3D turf as the artificial grass manufacturer wanted to regain the college and high school market, although it still cost "well over $1 million"according to AstroTurf president Bryan Peeples. Prior to that installation the Blue Jays used a FieldTurf surface from 2005 to 2009, which was put together from over 1300 trays, creating a significant amount of bad hops, caught spikes, and puffs of rubber pellets. The FieldTurf, which cost $2 million, replaced the old AstroTurf field--basically just green felt on concrete--which was installed in 1997. When that 1997 AstroTurf, which also carried a $2 million price tag, was installed to replace the original turf from 1989, it had an estimated 14-year lifespan since it would be used for baseball only (the Argos continued to use the 1989 turf). The major difference between the 1997 and the 1989 versions is that the 1997 version used velcro to connect the sections while the 1989 used zippers.

Replacing the current surface is probably a sound idea--it would be even the better if the Blue Jays got new turf and the Argos kept on using the old one. However, if this story is true and the interim turf will be ready by the first home series, the Blue Jays will have very little time to get used to their new turf, as there will not be any off days between the season opening series in Tampa Bay and the home opener against the Yankees. It would be interesting to see both teams testing out the turf in that first weekend of the season.