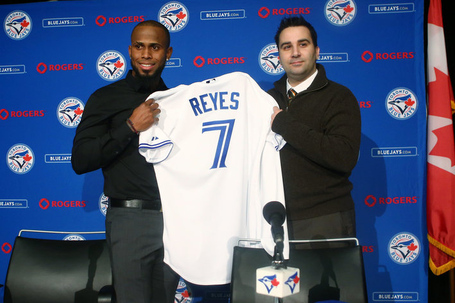 Down in the Toronto Blue Jays' ramshackle second home in Dunedin Spring Training has started.

Jose Reyes says his ankle his fine. Mark Buerhle is quietly preparing for another steady workmanlike season. While Josh Johnson, the starting point for the massive trade with the Miami Marlins that brought Reyes and Buerhle to the Jays is gone. So is Emilio Bonifacio, who the Jays had under control for 2014. John Buck, another piece, was quickly flipped to the Mets in the R.A. Dickey trade with the Mets.

Now, a year after the trade, and after a painfully quiet offseason, most observers see the Jays as peripheral players in the race for the American League East Pennant and the Wild Card consolation prizes. The hype and hope that came in the wake of the Marlins trade seems, at best, like a distant memory, and, at worst, a massive strategic blunder.

Should Anthopolous have known better?

In one fell swoop, Jays' General Manager Alex Anthopolous seemed to abandon his approach of building a homegrown team through the draft and international signings. In order to acquire Bonifacio, Buck, Buerhle, Johnson, and Reyes, he traded away three major leaguers: Jeff "Mendoza line" Mathis, steady shortstop Yunel Escobar and his team-friendly contract, and groundball machine Henderson Alvarez. Along with the big leaguers were three prospects: Anthony DeSclafani, Jake Marisnick, and Justin "Brother Can you Spare a" Nicolino.

At the time of the trade, it was clear that Anthopolous' motivation was to understandably take advantage of the elite emergence of Jose Bautista and Edwin Encarnacion, two players in their prime and acquire supplemental pieces to build a contender for the next three to five years, to paraphrase Paul Beeston.

But the Jays weren't a contender in 2013 and they only have two more years to take advantage of Reyes and Buerhle together. In fact, Reyes is the only one of the core of Bautista, Buerhle, Melky Cabrera, Dickey, Encarnacion, Brandon Morrow, and obviously Reyes, under guaranteed contract beyond 2015.

While down in that pinball machine they call a stadium, the Marlins' acquisitions, Alvarez, Hechavarria, DeSclafani, Marisnick and Nicolino will still be approaching their prime.

Last year, I was as excited about the trade as anyone, and at the time, I didn't really think critically about the total production the Jays were buying versus what they were selling. But now, after an offseason where the Jays have done very little to improve their roster, I wanted to go back and look somewhat analytically at the trade.

I wanted to calculate and compare the total expected WAR of all the players involved while also looking at the salaries to get a sense of the baseball and financial soundness of the deal - as if I was working in the Jays' front office at the time of the deal. So I looked at Dan Szymborski's pre 2013 projections for the players the Jays acquired and the ones they shipped out. And I also looked at Oliver's current 5 year projections for those players. I realize that my methodology is crude - combining two separate projection systems, separated by a full season is not ideal. Unfortunately, I couldn't find last year's archived 5 year Oliver projections. That said, I think this is a good, if very rough and unscientific, way for a regular fanatic like me to get a sense of the expected production of each player and what each front office was looking at (or perhaps should've been). 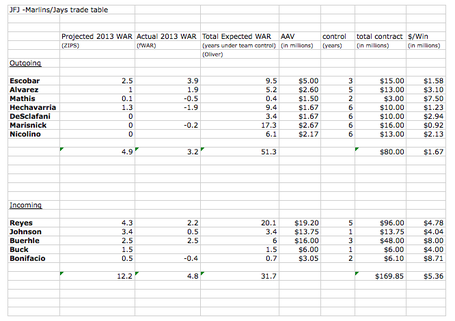 (my doodlings/click to enlarge at your own peril)

Before last season, Szymborski's ZIPS projection system had the new Jays good for 12.2 WAR for the 2013 season (I've included Buck since at the time there was no way to assume the Dickey trade was a done deal). The outgoing players (including Escobar who was subsequently flipped to the Rays) were projected to put up just 4.9 WAR.

We all know what a disaster 2013 turned out to be, the players the Jays acquired put up just 4.8 WAR, thanks, in large part to Reyes' injury, Johnson's terrible performance, and the increasingly poor decisions of Emilio Bonifacio on the turf. The big leaguers who were shipped out weren't far behind, putting up 3.2 WAR, thanks in large part to Escobar's 3.9 WAR season, the best of any player involved in the trade. Alvarez, put up a respectable 1.9 WAR but that was exactly offset by Hechavarria's terrible -1.9 WAR.

But I'm less concerned with the actual result than what the projections might have been at the time of the trade. Anthopolous has talked alot about value this offseason so I wanted to look into just what kind of value the Jays were getting and what value they were shipping out.

Using ZIPS' preseason 2013 projections plus Oliver's current 5 year projections, the Jays were acquiring an expected 31.7 WAR for a total cost of $169.85 million in guaranteed money (Reyes has a team option at the end of his deal). That works out to $5.36 million/WAR. Not a terrible ratio. Not really close to the $7.89 million/WAR the Yankees paid in 2013. But a far cry from the $1.33 million/WAR the Rays paid in 2013.

But the Jays weren't buying their whole roster this way, they had team friendly deals with Encarnacion and Bautista so, given where they were at on the win curve, you can understand paying a premium to push the team over the hump.

The real issue is that the Jays were basically counting on 2013 to derive a third of their WAR value (12.2 out of 31.7 WAR) and justify the massive added expenditure. A .500 plus season and, perhaps, a sustained run for the postseason would've justified this. But that didn't happen and now, with the approaching 2014 season, some of the prospects the Jays traded, like Marisnick, will start making significant contributions at the MLB level. So, the WAR surplus of incoming Jays minus outgoing Jays, that even after the disaster of last season was still a positive 1.6 WAR, will now turn into a deficit.

Oliver's projections for 2014 have the outgoing players putting up 10.1 WAR, with the players the Jays acquired (even if you magically keep Johnson and Bonifacio on the Jays) are only good for 7 WAR. Now the caveat here is that Oliver's projections have the benefit of the 2013 season and pre-2013 projections would be more generous to Johnson. Still, even if he was projected to put up a 4 WAR season in 2014, the Jays would still be basically getting the same output from their highly paid new players as the Marlins/Rays are getting from the kids plus Mathis/Escobar.

Another issue with the trade has to do with proverbial eggs in proverbial baskets. Going forward, Reyes is contributing the vast majority of production to the Jays: after 2014, Oliver projects him to produce 12.1 WAR, while Buerhle, in his last season with the Jays in 2015 is good for 1.6 WAR. So of the 13.7 WAR expected from the trade beyond 2014, Reyes is being relied upon for almost 90% of it. That's a great deal of risk given his injury history.

As I mentioned above, in total, if you include all the players the Jays acquired in the deal (but not Johnson's 2014 free agent year) their acquisitions are expected to produce 31.7 WAR (that includes 2013's preseason projections).

Oliver likes Escobar and Marisnick and thinks Hechavarria's defense will eventually make up for what he lacks with the bat. It projects the outgoing players (including Escobar's two remaining years under contract and Mathis' 2014) to put up a whopping 51.3 WAR (if you include 2013's ZIPS projections).

That's in large part to Marisnick's expected league average output of 19.3 WAR over six years, Escobar's 9.5 WAR over two years, and decent production from Hechavarria (9.4 WAR/5 years), Nicolino (6.1/6) Alvarez (5.2/4), and DeSclafani (3.4/6). Just a note: Oliver only does 5 year projections but DeSclafani, Marisnick and Nicolino are under team control for 6 years so I crudely just put that 6th year equalling the 5th year in WAR output.

The Marlins have risk too but it's spread across five young players, two of which are top 100 prospects (Marisnick and Nicolino), and another (Alvarez) has already put up 3.2 WAR and thrown a no-hitter before his 24th birthday. The gulf is so wide between the projected outgoing 51.3 and the acquired 31.7 that Marisnick can bust and the outgoing players will still give more production than the guys the Jays acquired.

Now from a production point of view Oliver (plus the 2013 pre-season ZIPS) projections give a clear edge to the guys shipped out but the risk of Hechavarria, DeSclafani, Marisnick and Nicolino contributing absolutely nothing is a real one (just as real as Reyes suffering a career-ending injury). But Escobar and Alvarez were also in the deal and they're "proven" big leaguers, even though they're not superstars.

The question then is, what risk would you take? And what kind of team are you building?

The real problem with the trade is one of value and that should've been apparent last offseason too. The outgoing players will cost an estimated $80 million - I've roughly estimated the total pay including league minimum plus arbitration guesses for the young players. So their expected $/WAR is $1.67 million/win, a number Andrew Friedman might find appealing. And, again, the new Jays' expected WAR is $5.35 million/win.

So not only are the Jays paying more, they're getting less production and, obviously, paying much more per win.

While Anthopolous likes to talk about value these days, it looks like that with the trade that will define him as GM he may have made a severe miscalculation with value. A year on, within Jays management and ownership the trade should ring alarm bells and raise questions about how the team uses analytics (if at all). 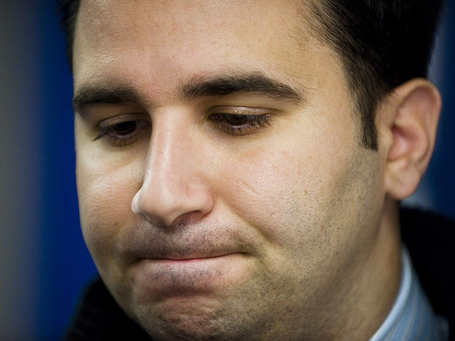 Given the fundamental revolutions in baseball and the stunning interdisciplinary success of the A's, Cardinals, and Rays, combining scouting, player development, and analytics, there isn't really very much margin of error for a team that places overwhelming emphasis on old school thinking or one way of doing things - which is what the Jays seem to be doing with scouting.

As it happens Billy Beane, Andrew Friedman, and John Mozeliak are three of the most open GMs in the game (heck, two of those guys allowed reporters access for books) whereas Anthopolous is so secretive and vague about his plans that it gives ammunition to the most paranoid fans among us.

I think I speak for many on here when I say that for the SABR and scouting-inclined fans that frequent Bluebird Banter it just makes us wonder: Who are the Blue Jays? what kind of team is Anthopolous building and how does he want to build it? What kind of GM does he see himself as: Ruben Amaro or Jeff Luhnow? Neither? How important are advanced analytics in the team's decision making?

Until he gets better at answering those questions or feeding the trolls criticism will only fester. Of course, if the team wins none of this will matter.

Personally, for now at least, I think that Anthopolous deserves the benefit of the doubt. Every GM makes mistakes, including Beane and Friedman. Ultimately, Anthopolous will be judged in the long-run by people alot smarter than me. Paging Michael Lewis...

(Let me know of any errors and omissions. I wrote this when I should've been working so occasionally I had to switch to my actual job)