Last season the Rogers Centre offered a craft beer for the first time. This year, not so much.

Last year at about this time there was big news in Blue Jays land. The Blue Jays had assembled a roster that looked like it stood a good chance to break the franchise's lengthy playoff drought and optimism was at its apex when this news hit. Arguably the best feel-good story of 2013 was the addition of craft beer, specifically Steam Whistle Pilsner, to the Rogers Centre experience for the first time.

"The brewery is disappointed, but was proud to be the first craft beer served in this venue, the last ballpark in North America to embrace the consumer movement to craft beer."-Sybil Taylor, Steam Whistle Brewing

Unfortunately, Bluebird Banter has learned that Steam Whistle Pilsner will not be available at the Rogers Centre this season. Ben Johnson of blogTO first reported the story earlier today.

The Blue Jays have paid far too little attention to the average fan's experience at the ballpark. Until last season one of the most obvious manifestations of that indifference was the lack of craft beer available at the stadium. In recent years consumers have been moving more and more towards craft beer, and stadiums throughout the United States have taken notice by helping fans combine two of their greatest passions, beer and baseball, at the ballpark with a veritable smorgasbord of beer available to stadium goers. Quite simply, Rogers Centre has failed to follow suit.

In 2013, Rogers decided that the least it could do was offer the quality craft beer brewed literally right across the street in the stadium. While a single beer did not a revolution make, it seemed like a start. One could look ahead and imagine a scenario where in the future the Blue Jays could eventually offer a beer selection that might make fans feel slightly less horribly ripped off when purchasing some adult beverages at the game.

Unfortunately, that progress has been halted. After hearing rumblings about it earlier this offseason, we reached out to Steam Whistle for comment this week. Their communications director Sybil Taylor told Bluebird Banter that the Toronto-based brewery's signature pilsner will not be available at the Rogers Centre this season.

"Greg Taylor, co-founder of Steam Whistle Brewing, had a final meeting with the Jays organization on March 18th," she said. "It is confirmed that Steam Whistle Pilsner will not be available in the Rogers Centre this year.

"The brewery is disappointed, but was proud to be the first craft beer served in this venue, the last ballpark in North America to embrace the consumer movement to craft beer."

The one-and-done for Steam Whistle is both bewildering and disappointing. The idea of a partnership between a major stadium and a brewery right across the street seems like a match made in heaven. Moreover it appears that Rogers is swimming upstream against the trend towards craft beer.

"Budweiser and Labatt are major sponsors of the club, so our goal has been to try to work with [them] to expand the offerings that they have within their portfolio."-Stephen Brooks, Toronto Blue Jays

Serving Steam Whistle at Jays games could have been a good first step for the team towards creating a more comprehensive and fulfilling fan experience. Instead, the team is proving itself deserving of a great deal of the criticism it has received in the past.

We reached out to the Blue Jays for comment about this but have not received any reply as of the publishing of this post--we will certainly update this story if it develops further. In February, before Steam Whistle's departure was confirmed, we discussed beer selection at the Rogers Centre with Blue Jays senior vice president of business operations Stephen Brooks.

However, he declined to comment when he was questioned about the then-rumoured elimination of Steam Whistle Pilsner from the concession stands, repeating that any expansions in selection the stadium will likely go through their corporate sponsors.

"Suffice it to say, we’ve got what we think is a good selection of beers. People always have their own opinions on what we should have or not have, and we certainly are aware of that and appreciate that. But like I said we work with our corporate partners to get the best offerings of beers they have within their portfolio. I think that has expanded certainly over the past couple of years, the feedback’s been great, and we’ll continue to try to do things like that."

To add insult to injury, along with the poor beer selection at the Rogers Centre the stadium manages to have some of the highest prices in the business. This infographic from Deadspin shows that Jays fans paid the third highest prices for beer in the MLB last season: 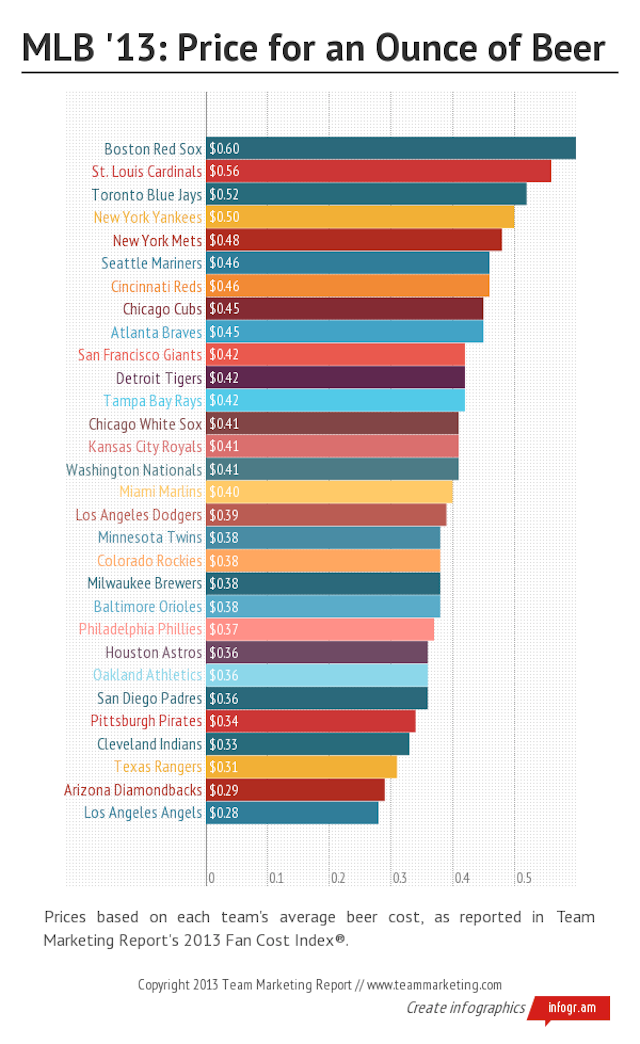 Whether you want to chalk all of this up to soulless bottom line obsessed overlords or simple cluelessness, the result is the same. Whichever way you slice it Rogers has missed the boat here.

Steam Whistle Brewery will remain a pre and post game destination for fans, and has a variety of Opening Weekend events. However, in 2014 the pilsner will not be where it's needed most. Inside the ballpark.