The season finally begins this afternoon as the Blue Jays travel back down to Florida to take on the Tampa Bay Rays at 4:00pm EST. The Rays went 92-71 finishing second in the AL East last year, eventually winning the wildcard game before going down in four games to the Boston Red Sox. As Tom noted earlier, Tampa Bay had a quiet offseason with Ryan Hanigan and Grant Balfour being the big additions, while the big losses included Fernando Rodney, Kelly Johnson, and Luke Scott.

The Rays still have an impressive infield consisting of Evan Longoria, Yunel Escobar, Ben Zobrist, and James Loney while their outfield isn't quite as strong although reigning AL Rookie of the Year Wil Myers wil be patrolling right field. Getting the start for Tampa Bay will be ace left-handed pitcher David Price who will face former Cy Young winner R.A. DIckey. 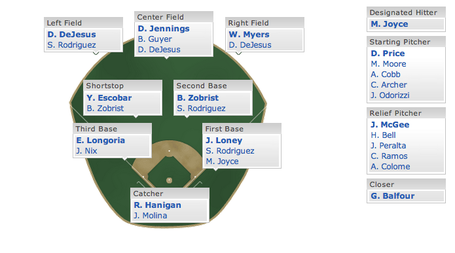 The Vanderbilt grad had a 3.33 ERA in 27 starts last season, pitching 15 innings against the Blue Jays allowing six earned runs. Price will likely have even more success against the 2014 version of the Blue Jays as left-handed hitters like Colby Rasmus, Ryan Goins, and Josh Thole will be forced to contend with his dominant stuff. As you can see below, Price is a pretty simple pitcher against left-handed hitters throwing either a four-seamer, cutter, or sinker nearly 85% of the time, but he still has a .198 average against him from southpaw hitters: 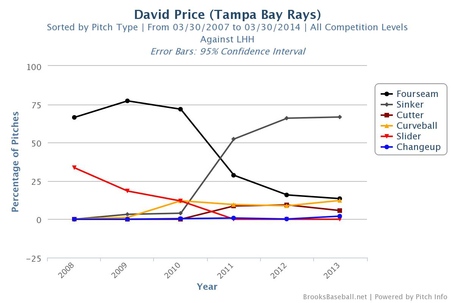 For someone throwing a sinker so much against same-handed batters he really doesn't do anything special with it, although two-seam fastballs are known to have some of the biggest platoon splits along with sliders: 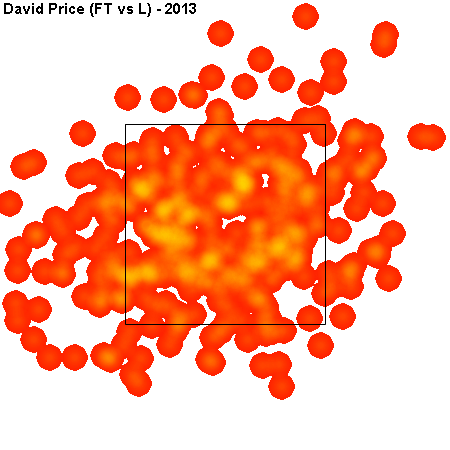 It's exciting to get the season underway again, even though some people seem to think no one cares:

I can't think of a Blue Jays season that was less anticipated in the past decade. Not even close.

I'm not sure where all the negativity is coming from, but I suspect it's just a huge swing in expectations in contrast from last year where groupthink anchored the team in first place, opposed to this season where everyone has stuck this team in last place.
Anyway, let me know below what you'd like to see in the previews this season. "Should Lind Play?" could always come back, but it's pretty self-explanatory at this point and some people were opposed to it last year. "Find the Link" is also a feature that could return if people wanted, although new features wouldn't hurt either. The previews should be fairly regular, although school may cause the first few weeks to be a little inconsistent. So without further ado, thanks for reading and IT'S TIME FOR BASEBALL!