So much for Opening Day optimism and starting fresh. Realism slapped Blue Jays fans in the face even before the end of the first inning in the first game of the 2014 when Toronto starting shortstop Jose Reyes was pulled from the game after his first at bat. Later, it was revealed that Reyes was suffering "left hamstring tightness," seemingly a continuation of the pain that he first felt during a March 22 spring training game. After it was revealed that Reyes was going to get an MRI on the hamstring, quotes from manager John Gibbons made it sound like the club was prepared to wait for results of the tests before deciding what to do. However, with two catchers and an outfielder on the bench, the Blue Jays really had little choice.

On Monday evening, ESPN's Jayson Stark reported that sources have told him that Reyes would have to be transferred to the disabled list. Later that evening, Sportsnet's Shi Davidi confirmed the story, revealing that the Blue Jays had indeed placed Jose Reyes on the 15-day disabled list, and that tiny Jonathan Diaz's contract would be selected from the Buffalo Bisons.

#BlueJays indeed placing Jose Reyes on DL. Not sure about corresponding move yet

Diaz was not on the 40-man roster, but since Matt Tuiasosopo's spot was not filled after his outright at the end of spring, no corresponding move was needed for the Jays to add him.

Jonathan Diaz is a 28-year-old infielder from Florida, and was the Blue Jays' 12th-round choice in the 2006 draft. He did not get to the major leagues in his first stint with the Blue Jays organization, but managed to get into five games with the Boston Red Sox after he signed with them as a minor league free agent after the 2012 season. He spent the majority of the 2013 season with the triple-A Pawtucket Red Sox, hitting just .253/.358/.316 with a couple homers and 11 doubles in 399 plate appearances. He, like Ryan Goins, is light-hitting, but is sharp with the glove. Diaz appeared mostly as a second baseman last year with Pawtucket, but spent significant time at short and third as well. As a righty, Diaz might see platoon at short with lefty Goins with Maicer Izturis at second base against southpaws.

I am as disappointed and saddened as any Blue Jays fan with the Reyes news, but I am also very happy that fans can finally see Jonathan Diaz in a Blue Jays uniform. Diaz and his then-fiancee (now wife) was involved in a t-bone collision when their taxi driver ran a red light, leading to multiple injuries for his wife and concussion symptoms for Diaz. I am very happy for them that he's finally made the team. I will always have a soft spot in my heart for Jonathan as he is the only player I've ever met who was shorter than me--I had to tilt my head down a bit to talk to him! Diaz is officially listed as a very, very generous 5'9. From these pictures from the Jays' photo day during spring training, see if you can guess which one is Jonathan Diaz: 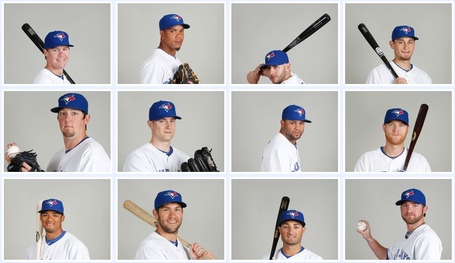 Diaz will be wearing #1 on his back with the Blue Jays (after wearing #76 with Boston last year), and he told Neil Davidson of the Canadian Press that it would be an honour for him to be wearing Tony Fernandez's old number because "he was an unbelievable shortstop."

Of course, the big story is Jose Reyes's durability, and whether it was smart for the Blue Jays to play the oft-injured shortstop for two nights in Montreal if he already had some issues with his hamstring. Certainly, if the Jays wanted to be absolutely careful, they wouldn't have chanced it; however, if it was a lingering issue than he likely would've aggravated it somewhere else, especially since the team's first 10 games would be on turf at Tropicana Field and the Rogers Centre.

The current injury to Reyes certainly doesn't look as severe as the ankle sprain he suffered 10 games into the 2013 season, so hopefully he won't be gone more than the required 15 days.