No afternoon baseball today, so use that time to read this post and make some pancakes!

Following an undefeated February, the Blue Jays have been winless in March and now own a 3-3 record after six spring training games. Not that it matters, really: the goal is to get veterans a couple of innings of work then put in non-roster invitees and kids to see how they look... against other non-roster invitees and kids. The year when the Blue Jays "won" the Grapefruit League was also the year where they carried an excellent roster of prospects (also happened to be the year I visited Dunedin, fyi) The data below is a little dated but you can see that spring training records are barely predicative of regular season results. So I wouldn't get too wound up about wins and losses in individual games. 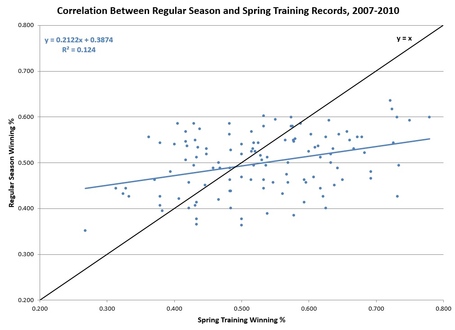 In a rare spring night tilt against the Phillies, the Blue Jays are going to be sending out R.A. Dickey for a longer outing, around three or four innings, according to Gregor Chisholm's always-excellent North of the Border blog. Sergio Santos is expected to make his first spring appearance following Dickey, while Steve Delabar, Neil Wagner, Marcus Walden, and Liam Hendriks will also get innings in.

You can follow the game at MLB.com (audio is free for everyone, video only for MLB.tv subscribers). As always, we will have a GameThread here for you to join in.

TED Talks, But With Grass Stains

Kevin Kennedy is launching a fantastic-sounding series of baseball talks in Toronto called PITCH. The first event will be on Monday, April 7 (don't worry; it's an off day) in Toronto's Centre for Social Innovation at Bathurst just south of Bloor. They will be featuring Sportsnet's Shi Davidi and National Post's John Lott to talk about their book Great Expectations: The Lost Toronto Blue Jays Season (see my review here). Occasional Bluebird Banter Jared Macdonald and The Sport Brahs' Dylan Gott will be speaking as well. Of course, after the talk there will be a question-and-answer period.

Tickets are $15 and the event is held in support of the Jays Care Foundation; add another $15 and you'll get a copy of Davidi and Lott's book. Get your tickets ahead of time right here, and since y'all are Bluebird Banter readers, you can save $5 by entering in the coupon code "minorleaguer" at checkout. Oh yea, the $10 you'll pay will even get you a free sample of Left Field Brewery's delicious brew!

Hope to see you there!

The Origins of Edwin Encarnacion

Most of us already know how Edwin Encarnacion became a Toronto Blue Jays. He was basically the "throw-in" in a deal that landed the Jays a couple of young pitching prospects in Zach Stewart and Josh Roenicke when J.P. Ricciardi traded away Scott Rolen at the deadline. So why is Encarnacion listed as a free agent acquisition in the Roster Tree that is in our Library? It's because he was designated for assignment twice in 2010 (I think once had partly to do with his not running out a pop-up or ground ball), allowing the Athletics to claim him in the offseason, only to let him go as a free agent a few weeks later before re-signing with Toronto.

Kyle Matte, over at Drunk Jays Fans, put up an excellent recounting of how Encarnacion went from prospect to E5 before becoming the All-Star EE we all know (and now) love. Give it a read!

One year ago today, we had a post looking at the battle for second base between Maicer Izturis and Emilio Bonifacio. Tom wrote "I'm pretty sure Izturis hasn't forgotten how to hit over the winter" after he went 0-for-15 to start the spring (turns out he did!), and there were already worries about Bonifacio's defense (so it wasn't all turf?). The comments are also fun to read in hindsight.