Is that the sweeping of brooms I hear coming nearer? The Blue Jays get their first shot at a series sweep tonight as they take on the lowly Astros. R.A. Dickey gets his third start of the year and faces off against lefty Dallas Keuchel. The 26-year-old is definitely not one of the best starters in the league with his ERA usually sitting in the 5's after every season. He's made one previous start this year going five innings against the Los Angeles Angels allowing four runs on eight hits. This is an important game for the Blue Jays to show they can take advantage of a weaker pitcher and dominate the game.

Keuchel throws pretty much every type of pitch ever invented, which might be part of the reason he's struggled so massively in his major league career. On any given night, Keuchel will throw a four-seamer, cutter, sinker, changeup, slider, and a curveball. His pitch map is basically tie dye: 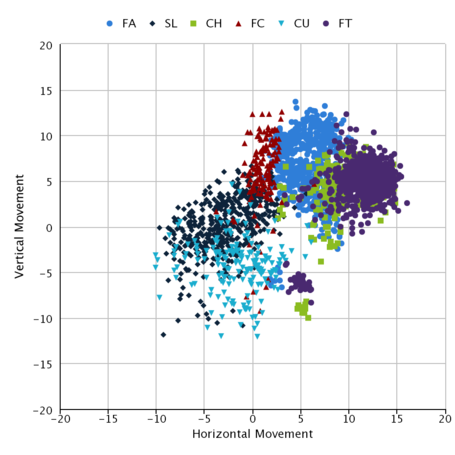 His slider isn't a bad pitch and he throws it a ton against left-handed hitters leading to a fair amount of whiffs. He buries it down and away which could spell trouble for Adam Lind if he gets the start. 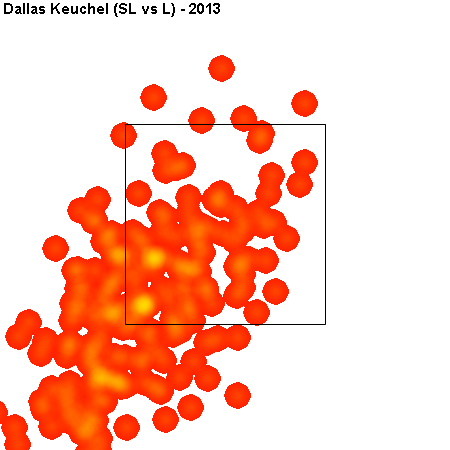 Keuchel actually faced the Blue Jays twice last year near the end of the season pitching 14.1 innings allowing six earned runs on 14 hits. Funnily enough, the Astros won the game he allowed six runs in and lost the game where he shut the Blue Jays out for 7.0 innings.

Adam Lind got the start in one of the games against Keuchel last year and was positively dreadful, so it's probably best if he just sits this one out regardless of how bad the left-handed starter is. It would be nice if Moises Sierra got a start eventually, since the team is going to need to do something with him sooner or later. I actually like this lineup a fair bit, all things considered:

After a one year hiatus, Improbable Jumbotron Factoids have made a miraculous return:

Find the link between Dallas Keuchel and the 2010 Oakland Athletics pitcher who allowed the most runs on the team.
SWEEP SWEEP SWEEP!