The series is on the line today as the Blue Jays face off against the Orioles this afternoon at 1:30pm in Baltimore. Lefty Mark Buehrle is on the mound for Toronto against free agent signing Ubaldo Jimenez for the Orioles. Jimenez signed a four-year $50 million contract this offseason after being pursued by a variety of teams, including the Blue Jays. The 30-year-old right hander has been pretty dreadful so far this season getting hit around by fellow AL East rivals Boston and New York. In 10.2 innings, he has allowed eight earned runs on 13 hits along with eight walks.

As many people know, Jimenez relies on his sinker to rack up groundball outs, although this year the groundball pitcher currently has a GB% of 18.8, which is going to be a big problem if that keeps up going forward. Along with the sinker, the Dominican native features a four-seamer, slider, and splitter. 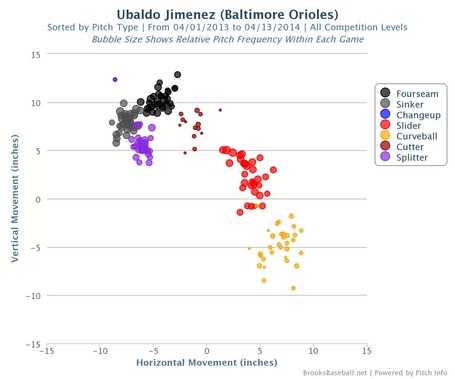 Since first pitch is creeping close we'll jump right to the lineups:

Find the link between Ubaldo Jimenez and The Apple Macintosh Computer

This would definitely be a good game to win early in the season, enjoy!