A cold night awaits the Blue Jays this evening as they roll into to Minnesota to take on the Twins at 8:10 EST. First-year Twins pitcher Phil Hughes takes on Brandon Morrow in what is expected to be a frigid evening at Target Field. Hughes, a former Yankee, inked a three-year $24 million contract this offseason with Minnesota which seems like a fair deal for both parties. So far this season Hughes has been consistently inconsistent in his first two starts, pitching 10 innings and allowing eight earned runs. As a fly ball pitcher, his success essentially rests in how many balls soar into the Target Field seats and how many fly into his outfielders' mitts.

This is how the Twins are setting up these days, with Joe Mauer now permanently at first base: 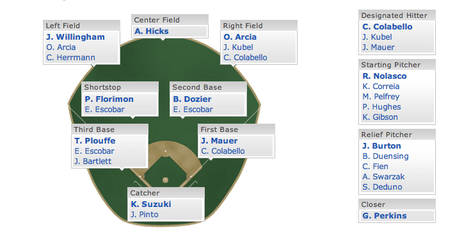 That's right, his horrid slider that he threw the most behind his fastball in 2013 has been scrapped and his repertoire is now completely different. Like the tweet says, Hughes has become a predominantly fastball, cutter pitcher only bringing down the velocity when throwing his curveball. This is good news for Jose Bautista and his fellow Blue Jays power hitters who can focus on the fastball and be aggressive with Hughes' more predictable pitch selection: 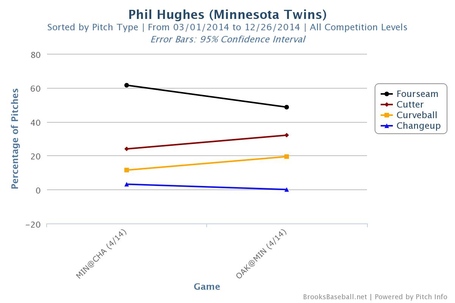 This middle infield situation is going to be a rough ride until Jose Reyes returns.

Find the link between Phil Hughes and the Harrisburg Senator left-handed pitcher who hasn't walked a batter so far this season.
If any Blue Jays fans made the trek down to Minneapolis, I hope you enjoy the nice city regardless of the weather.