After Tuesday's up-and-down roller coaster, the Blue Jays look to continue their winning ways in the great state of Minnesota with a double-header today. After last night's game was postponed,  R.A. Dickey will take the mound this afternoon against Mike Pelfrey in the make-up contest. The 30-year-old right hander Pelfrey was a free agent this winter and re-signed with the Twins for two more years and $11 million. So far this season he has started two games and been pretty dreadful allowing nine earned runs in 10.1 innings of work against Cleveland and Oakland as well as surrendering seven walks. With Pelfrey usually sitting around a 13% K-rate, he can't afford to be so wild with his pitches and will need to cut that walk rate in half if he's to have any success this season.

The 6'7" righty throws mainly a sinker with a four-seamer, splitter, curveball, and slider all making appearances as well. He doesn't really vary his pitches against different handed batters, pounding the zone with sinkers and fastballs regardless of who is standing in the batter's box. You can take a look at the movement of his sinker below: 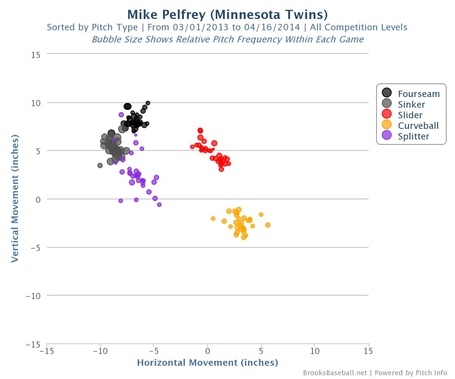 It's easy to see what Pelfrey tries to do with his sinker against right handers when he's commanding it as he either wants it to run in on the hands or to catch the outside of the plate forcing hitters to swing at a pitch that's tough to pull to left field: 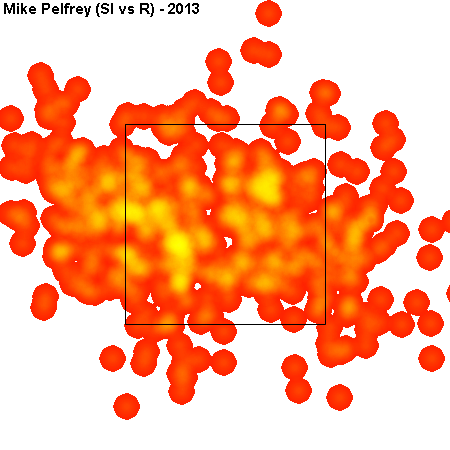 That sinker on the hands is going to be brutal in this cold weather, so I'd imagine Pelfrey will have a lot of success with it tonight. This GIF also needs to make an appearance:

As we now know, Anthony Gose is unavailable for the first game, meaning that the depth of the Blue Jays is still a large issue. There's still no word on the health of Colby Rasmus so we'll assume he can play today:

It seems likely that MLB lineups during World War II had more depth than this team, even after the majority of the players left the country to fight.

A new "Find the Link" for today's re-scheduled game:

Find the link between Mike Pelfrey and the Wall Street Journal

Enjoy the games today, but don't forget that Mike Pelfrey is one of the slowest pitchers in the league so it could be a long one.