The Blue Jays look to guarantee a series win this afternoon in Cleveland as Mark Buehrle toes the rubber against Corey Kluber of the Indians. The 28-year-old right hander put together a solid 2.7 WAR season in 2013 on the back of low walk totals and a 45% groundball rate. On the heels of struggling to get solid contact against Justin Masterson yesterday, the Blue Jays will get another shot at a pitcher who relies heavily on their sinker to get outs. Kluber throws his sinker about 50% of the time along with a cutter and slider, plus a changeup against left-handed batters. His hard stuff hovers in the low-90's, although his slider/curveball (depending on who you listen to) is by far his best pitch.

Here's the movement on his pitches and you can decide whether he has a cutter and slider or a slider and a curveball: 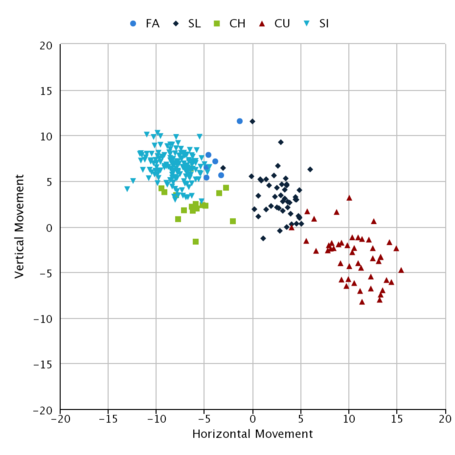 It feels like a great Saturday morning for some GIFs:

Here's Kluber's slider/curveball/nasty striking out Kelly Johnson, which isn't that hard to be fair:

Here's the sinker that he throws a lot:

I'm pretty pleased the lineups are already out because it's getting hard to know who's on the team anymore (although this isn't a bad lineup):

Enjoy the game this afternoon, Corey Kluber is pretty underrated so it should be a fun one to watch.