The .500 Blue Jays face off against the Tampa Bay Rays in the third game of a four game series tonight at 7:00 pm. Left hander Matt Moore will go up against fellow southpaw Mark Buehrle as both teams try to win their second game of the young season. The 24-year-old Moore started 27 games last year, ending up with an ERA of 3.29, although his xFIP was 4.32 thanks to a low BABIP and HR/FB rate. Although he averages almost a strike out per inning, he's faced control issues in the past few season which resulted in a 4.55 BB/9 in 2013.

His pitch usage changes a lot based on what's working for him, but he features a low-90's fastball, an effective slurve-type pitch and a changeup: 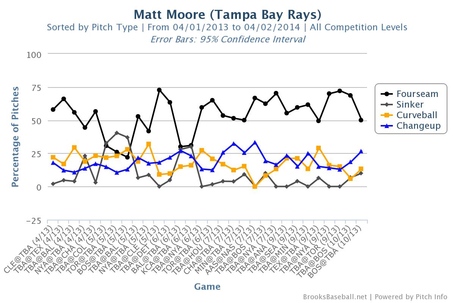 Moore's changeup has become his best pitch and is thrown almost exclusively against right handed hitters, which likely explains why he has no clear platoon splits. The pitch is so effective because it looks extremely similar to his four-seam fastball, but has a 7mph difference in velocity and is kept down in the zone. 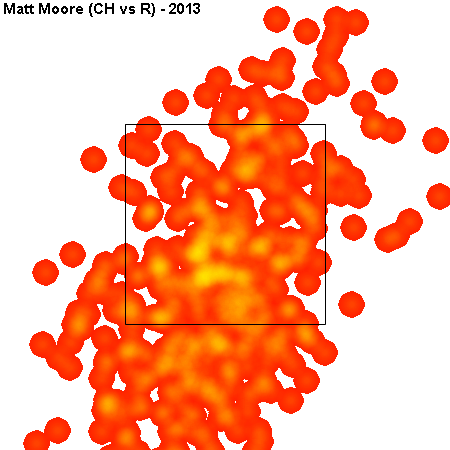 It's probably best to just avoid having Adam Lind go up against the lefty, regardless of Moore's splits. It's the third game of the season and the lineup is already disgusting.

I decided to bring "Find The Link" back after a few people asked for it in the last preview. I'll keep a tally, similar to the way I did last year and the winner will claim a few thousand internet points.

Find the link between Matt Moore and an 82-day-long battle in World War II.

Post your answer in the comments below and make sure it's not a reply to someone else's comment so there's no conflict with who answered first. Enjoy the game!