Watch lag-free* live games on MLB.TV with this one weird trick!

*ok, maybe not lag-free, but less laggy for sure

Share All sharing options for: Watch lag-free* live games on MLB.TV with this one weird trick!

Long-time users of MLB.TV would know that there were two options to stream games, "Standard" and "NexDef". Although the NexDef option allowed for PVR-like options to rewind live games and jump to a particular plate appearance, the feed was generally 30 seconds behind the TV broadcast, while the Standard stream suffered from less latency.

Normally, a 30-second lag would be acceptable, but the delay would make it difficult to participate in live game chats online--whether in GameThreads here on Bluebird Banter or on Twitter--as 50 people would have already spoiled the upcoming play for you with their snarky comments. I timed the difference between the two feeds during this afternoon's Braves-Brewers game (which had both teams' starters pitching no-hitters into the seventh inning) and the NexDef feed was 34 seconds behind the standard one, so people watching online probably found out how Chris Johnson broke up the no-no via Twitter. Thus, most people watching and chatting last year would choose the Standard feed. However, for some reason, the folks who run MLB.TV decided to eliminate the choice for the 2014 season, forcing all their subscribers to go through NexDef replacing both streams with a new Flash-based media player.

A workaround for this problem was brought to my attention by reader hansdampf on Monday. In order access the old MLB.TV player, simply follow these steps: 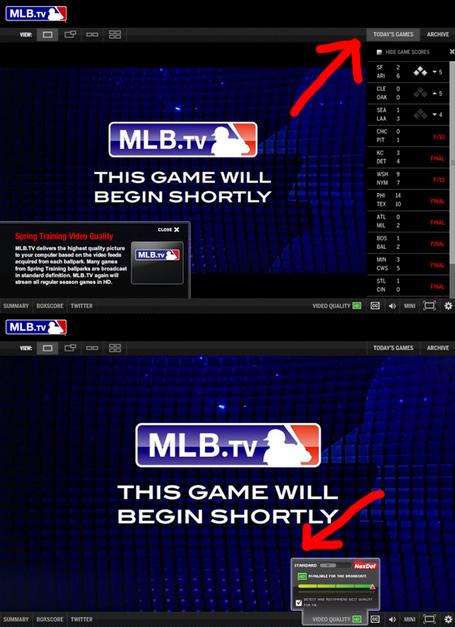 EDIT: Reader interestingmonkey mentioned in the comments that the current version of MLB.TV is in fact not NexDef, so that means you can feel free to uninstall the NexDef plugin from your computer. I uninstalled it and checked that both the new player and the old player worked fine. Thanks, intriguing simian!
Uninstalling NexDef was not trivial for me (Windows 8.1), as it did not appear on my programs list. So to uninstall it, I opened Task Manager (by pressing Ctrl-Alt-Del), found NexDef in "Background Processes", right-clicked on the process, clicked "Open File Location", then ran the uninstall.exe file in the folder. Don't ask how to get it off of a Mac; I have no idea.