I've had a review copy of OOTP 15 for a little while now. I've held off on doing a review because I had a few problems with the graphics on the Beta copy they first sent out. Now I have the finished version,  I'm having far fewer problems (though occasionally I hit a menu tab, especially in the ingame screen, and have a menu different menu open, which is maddening).

As always you can play as GM and just simulate all the games, or you can be GM and manager and make all game decisions. You make all the decisions a GM would make, sign free agents, trade, DFA, put players on waivers, promote from minors, deal with options, just about everything a GM has to do, other than read what bloggers say about their decisions.

I'm a huge fan of the OOTP game. I've been playing it for years now. Generally, if my computer is on, the game is on, at least in the background. It is very addictive. Every new version has little improvements in the AI, the menus, the depth of the game. And, of course, every new version has the latest player rosters. This year's version has all the normal small improvements and some other bigger changes. The changes include:

You can play starting in 2014 or you can play a historical league, starting whenever you'd like. I've played from the start of the Blue Jays franchise, which is fun to do too. Or maybe you want to play in the dead ball era.

What I've done is start as the 2014 Blue Jays. The game starts you off about a week before the start of the season. I'd rather the game start you at the start of spring training, but that's life. The OOTP 2014 Blue Jays are not a very good team. The starting pitching is terrible, Dustin McGowan's stamina isn't rated high enough for him to start games. R.A. Dickey is old and not very good, Mark Buehrle is pretty lousy, Drew Hutchison hasn't been good. The best two of my starting five have been Brandon Morrow and Todd Redmond. Here take a look (at least I don't have the 8 man bullpen). Oh, Sergio Santos was injured in the first week and is gone for the season. 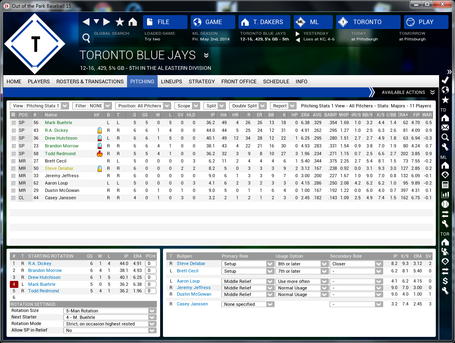 I have J.A. Happ playing a rehab assignment in Buffalo, but, when the assignment is over, I'm likely going to release him. No one in the OOTP world will take him in a trade. Mark Buehrle, Ricky Romero and R.A. Dickey are equally untradable. In the minors, Marcus Stroman is just about ready to be called up. Aaron Sanchez is in New Hampshire, and is a little further away from being ready to move up.

On offense, just like our Jays, the top of the order is pretty good the bottom is terrible. One of the first things I did was offer a contract to Stephen Drew, the unfortunate thing is the game doesn't figure he can play second base, so he made errors at a rate that reminded me of  Emilio Bonifacio, so I dumped him in a trade. In real life, I'm sure Drew would be able to pick up how to play second base quickly. 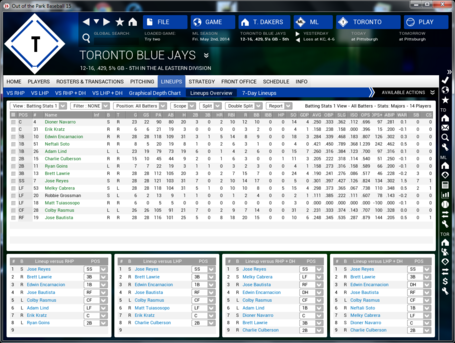 The game gives you a good feel for how bad a spot Alex Anthopoulos is in, though apparently they were wrong about Buehrle being totally awful this year

It really is a great game, the most addictive game I've ever played.

Just $39.99, it is available now from OOTP Developments.