After an off-day on Monday, the Blue Jays welcome Buck Showalter and his Baltimore Orioles to the Rogers Centre for a three-game midweek series. R.A. Dickey goes up against Mexican right hander Miguel Gonzalez tonight in a battle of pitchers who haven't gotten off to the greatest of starts this year. Gonzalez has made three starts, against Detroit, New York, and Tampa Bay, surrendering 10 earned runs in 14.1 innings along with five walks. His line isn't as bad as it looks mind you, as he pitched five scoreless innings against the Rays in his last start.

The 29-year-old Gonzalez throws a four-seamer, sinker, slider, curveball, and splitter all fairly regularly although his fastballs are thrown nearly 70% of the time. He pounds the zone low and away when facing up against right-handers, which is never a great match-up for the Blue Jays sluggers: 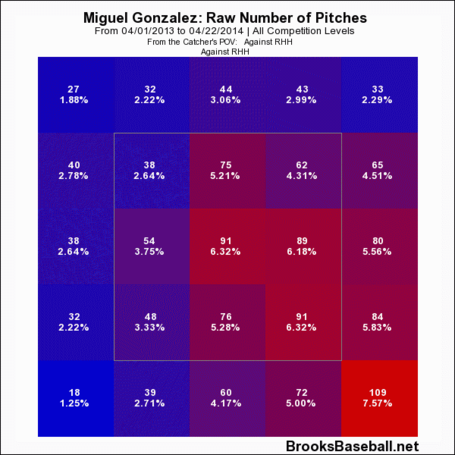 Gonzalez's splitter actually has a ton of movement on it, but he should avoid throwing it to right-handed batters because even Rajai Davis can do this with it. The splitter looks to be a big reason why Gonzalez is basically split neutral, as lefties have a really tough time making contact against it (36% whiff/swing).

Find the link between Miguel Gonzalez and the Hellboy movie series
Let's hope R.A. Dickey finds his knuckler in the friendly confines of the dome tonight.