Coming off their game of threes last night, the Blue Jays look to continue their winning ways against Baltimore "ace" Chris Tillman. The Anaheim native has been dominant this year allowing only five earned runs over the course of 26.1 innings with Baltimore winning every game he's started except the one against our very own Toronto Blue Jays. On April 11th, the exact same pitching matchup of Dustin McGowan and Chris Tillman resulted in a 2-0 win for Toronto in a lucky game. I didn't remember even watching that game until I read Tom's recap and now I really have no idea if I watched it, but it sounds familiar! Anyway, Tillman was lights out in that game, but was let down by his defense and got handed a loss (what a stupid stat).

In the April 11th game, Chris Tillman did what Chris Tillman usually does when he plays baseball. He threw a bunch of fastballs in the low-90's and mixed it up with a solid curveball and an occasional changeup. I believe this is what we call a curveball falling off the table: 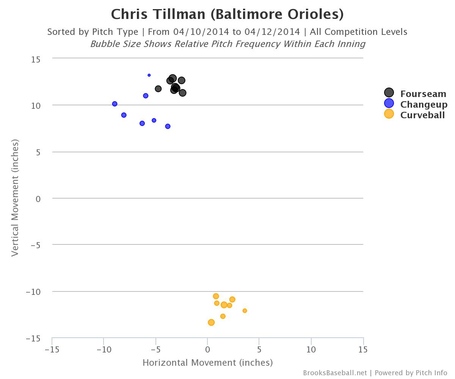 How Chris Tillman is always so effective is a great mystery to me, but he is prone to giving up home runs, which bodes well for the Blue Jays at home tonight (especially after last night's outburst). If Tillman is lacking the pinpoint command shown below that gives hitters no quality pitches to hit, then the Blue Jays should be able to rough him around a bit: 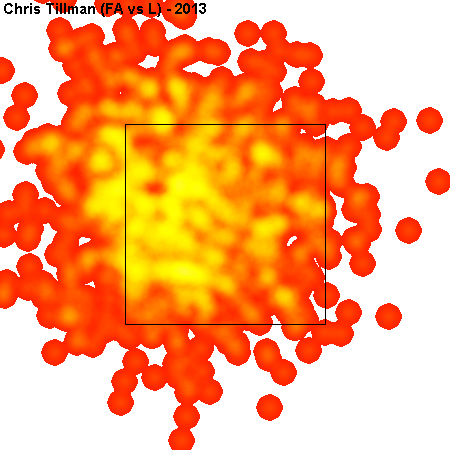 Not a bad lineup at all:

FInd the link between Chris Tillman and the unfortunate 10-year anniversary that passed yesterday.

Maybe I'm alone in my thinking, but this has been a fun team to watch this year and if everyone stays healthy you never know what could happen.