The Ryan Goins-less Blue Jays march into Kansas City tonight to start a three-game series with the 12-12 Royals. Taking the mound tonight is left-hander Jason Vargas going up against the Jays starter/player-who-pitches-the-first-four-innings in Dustin McGowan. The Royals are actually pretty fun to watch this year and have a lot of exciting young talent, including the amazing RHP Yordano Ventura who we get to see on Thursday (as commenter cpass3 pointed out, Ventura's start has been moved up to Wednesday to keep him on regular rest). The young team still hasn't put all the pieces together, but they're definitely a squad to watch going forward in the AL Central: 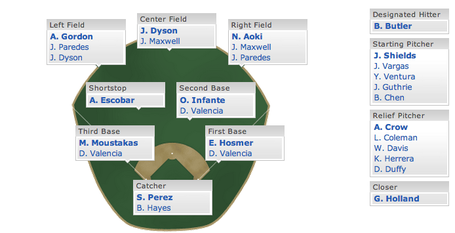 Who's Hot, Who's Not

Royals first baseman Eric Hosmer has had a hot start to the year hitting .295 with an OBP of .356. The left-handed hitter has 13 hits in his last 10 games as well as three walks, although he has yet to hit a home run this season. The Kansas City team as a whole has struggled through a pretty large power outage to start the 2014 season, with the team only having 10 home runs in total compared to Toronto's 30 dingers.

Mike Moustakas has definitely been not hot to start the season, currently sitting at a .159 average with a lowly .213 OBP. Surprisingly, four of the Royals ten home runs have come off the bat of the struggling third baseman, but that hasn't been enough to propel him above replacement level as of yet.

As mentioned earlier, the pitcher this evening is left-handed Jason Vargas who is the rare fastball-changeup pitcher. He's been dominant this year after joining the team on a four-year $32 million deal in free agency. In five starts he has an ERA of 1.54 and a FIP of 3.94 thanks to a .229 BABIP and a 91.2% LOB.

His high-80's fastball sets up his deceptive changeup against hitters on both sides of the plate, allowing him to succeed with far from electric stuff. Blue Jays sluggers Jose Bautista and Edwin Encarnacion actually struggle against changeups so this might not be the best matchup in the world as they usually are sitting on the fastball. You can see how Vargas' changeup has solid arm-side run as well: 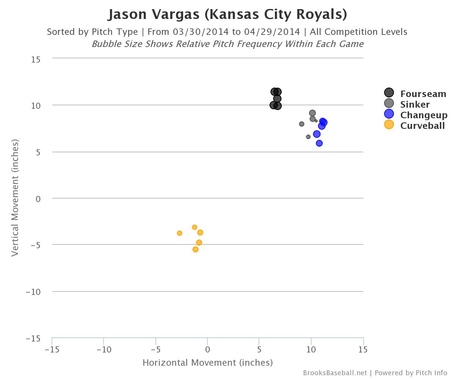 If GIFS are more your thing:

The time to call Stephen Drew may be fast approaching.

Find the link between Jason Vargas and the current Cincinnati Reds closer.