Quite a pitching matchup in Kansas City tonight with Drew Hutchison going up against the incredible Yordano Ventura. The right-handed Dominican has burst onto the scene this year blowing people away with his 100 mph heat and nearly unhittable stuff. The 22-year-old signed with Kansas City in 2008 for only $28,000 and has worked his way up the system fairly fast to make his major league debut as a September call-up last season. In four starts this season, the 5'11' fireballer has allowed just five earned runs over 25.0 innings as well as 27 strikeouts (that's a 26.2% K%!). I haven't watched as much of Ventura as I would have liked, but it's been an absolute pleasure when I do get the chance.

Yordano Ventura throws HARD and his changeup sometimes comes in even faster than Mark Buehrle's fastball. His repertoire features a fastball, sinker, cutter alongside a curveball and changeup. He's basically the same pitcher against both left-handed and right-handed hitters, throwing his changeup 18% and 14% of the time respectively, getting 35.62% whiffs/swing with it. His fastballs don't differ in movement too much, but the velocity that they're thrown with makes up for the lack of deception: 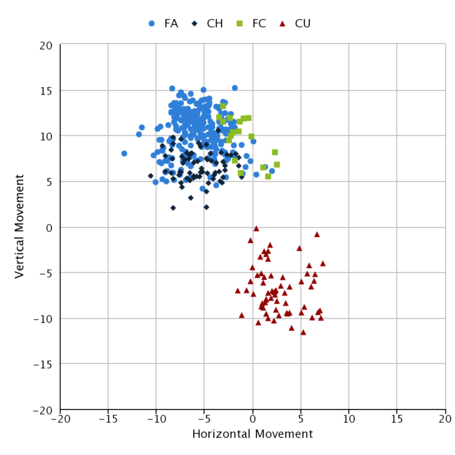 It's probably a good time to look at some GIFs. (Just click on the links to watch them, so it doesn't kill mobile users)

Here's a 102 mph Ventura fastball that has no movement at all:

Once you see a few of those fastballs it gets a little harder to time up his wicked changeup:

Rounding up his pitches is the nasty curveball:

Find the link between Yordano Ventura and the Blue Jays starting right fielder from 1995 to 1999.
Should be a fun one to watch this evening. I'm hoping for a pitcher's duel with one of the Blue Jays sluggers hitting a Ventura fastball 450 feet into the stands for a 1-0 win.