Share All sharing options for: How to get to the Rogers Centre on the TTC this weekend with no Yonge subway

Let me get this out of the way: I am a big fan of public transportation and of the Toronto Transit Commission. I think that, at least from what I can see as a frequent customer, the TTC has undergone improvements under the leadership of new CEO Andy Byford. I also think that they get an awful lot of flack by customers for delays and other issues that are largely out of their control.

That being said, they really could've picked a better time than this weekend to schedule a large subway shutdown. Because of much needed signal upgrades to the 60-year-old Yonge line, the TTC chose several weekends during the year to partially shut down subway service in order to complete the work. Unfortunately for Torontonians and visitors, one of the weekends they chose was April 5-6, when the Blue Jays are set to play two games against the Yankees--who attract a bunch of out-of-town visitors--in games that should draw upwards of 30,000 fans (or am I too hopeful?), and the Maple Leafs are playing their final home game Saturday evening.

As you can see below, the downtown portion of the Yonge line will be shut down completely, meaning that here would be no subway service from Bloor station to St. Andrew Station. Most fans who go to the Rogers Centre would normally head there via Union Station, but of course, there will not be subway service there this weekend (I don't think this affects GO or VIA train/bus service). 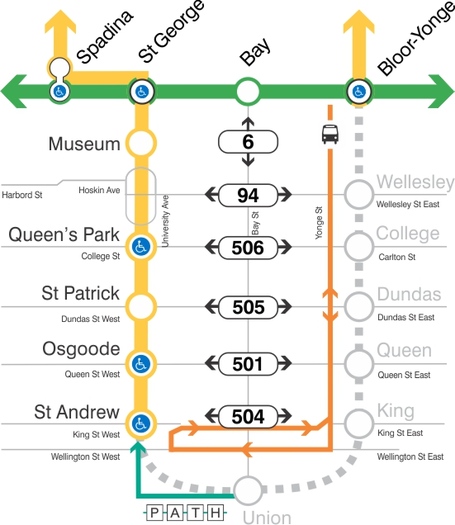 To give the TTC some credit, they did plan out some alternative ways to get to and from the dome after they were made aware that the Jays were playing the Yankees this weekend:

If the post-game crowd volume is large enough, we were informed that the TTC will be running a special Blue Jays express (and here I thought that was cancelled), route 4012 (which was probably numbered after Mark Lemongello and Roberto Alomar or something). The route will operate only if necessary, and starting at 4 pm. If they deem it necessary to run this alternate route, they will be pulling the 14 extra shuttle buses that was mentioned above and placing them on this route, which will pick fans up at St. Andrew subway station and bring them to Bay station on the Bloor-Danforth line and Rosedale station on the Yonge line. 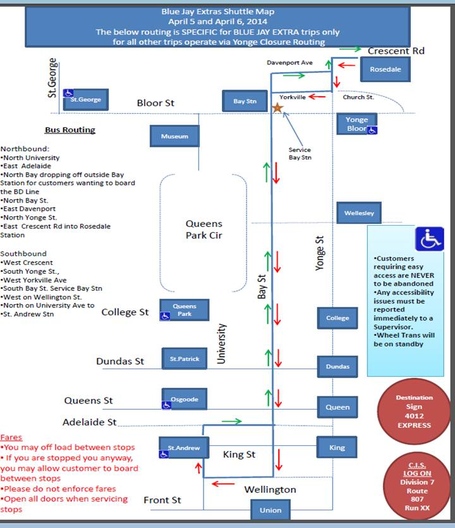 Image courtesy of the TTC

I think the TTC really should've erased the "Please do not enforce fares" point before handing this out to us, but then again we're all honest people, right? Everyone knows that getting a free ride means you're stealing from all transit riders and taxpayers, right? And you know that I am both a rider and a taxpayer, right? And you probably don't want to steal from me, so don't be a dick, do pay for your ride.

Good luck with transportation, folks. Gates open at 11 am on both Saturday and Sunday, so get there early if you don't want to miss any pitches. Otherwise, stay cool and be patient.

Much thanks to the TTC's Brad Ross, executive director, corporate communications for the alternate routes suggestions.