Rarely has an umpire's strike zone frustrated me more. Everything low was a strike, if CC threw it. It was hard to take, I almost walked away from the game in the middle innings.

And that last at bat for Melky Cabrera? Oh well, I'll just carry it to the gym and use it to help the workout. 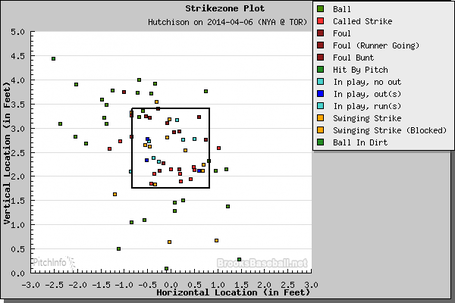 Anyway, bad start for Drew Hutchison. He went 3.1, allowed 6 hits, walked 3, hit a batter and gave up 6 earned. He did have 6 strikeouts,  but he wasn't good. Everything was up. I know the great spring he had made us think he was going to be great, but he's going to have days like this. I just hope not too many. The plate umpire wasn't good, but he wasn't the reason Hutchison was so bad.

Our bullpen was great, especially Todd Redmond, who went 3.2 scoreless innings, allowing just 3 hits, 1 walk, with 5 strikeouts. Steve Delabar and Esmil Rogers each had a scoreless inning of work.

On offense, Melky Cabrera started us off with a home run. Unfortunately, he it a hard fly out, with 2 on, to finish the game. We scored 3 more in the 6th. Two out singles from Jose Bautista and Edwin Encarnacion were followed by doubles from Dioner Navarro and Erik Kratz. That made a game out of it.

We came close in the 9th. Brett Lawrie singles and Adam Lind walked, with one out. But Colby Ramus popped out and Melky Cabrera, after taking a pitch that was at least 6 inches off the plate called a strike, flied out pretty hard to right field.

It was funny, Lind took some pitches that were close and got the calls, then Melky takes a pitch well off the plate and it's a strike It was hard to understand.

We had 8 hits in all. Two each for Maicer Izturis and Edwin (including a triple). Cabrera, Bautista, Dioner Navarro and Kratz each had one.

The Yankees stole 3 bases against us. I don't know if they knew something about Kratz' arm, but only one of the three steals was a close call (Gibby challenged and lost).

The Astros come to town, after tomorrow's off-day. I'm tired of the one good, one bad pattern we've had so far this season, but it's better than the all bad start we had to last season.

I'll admit I didn't like the Jays Up Close profile of Alex. I've heard all those excuses about why they did nothing this summer and they don't impress me. There aren't prizes for coming close to picking up a needed pitcher.

We had 1224 comments in the GameThreads. Great job all. Pikachu led the way (I really thought I had a shot today, I gotta start delete other people's comments). I don't know anything about Pokemon, or I'd suggest that Pikachu could evolve into the next thing.