American League West punching bag Houston Astros visit Toronto this week for a three game series, with the 'Stros playing some surprisingly good baseball so far this season. After taking two out of three at home from the Yankees (something the Blue Jays couldn't do), they went to Anaheim and won one game in their four game series. With Houston being a team that is expected to be pretty awful again this year, it should be a good opportunity for the Blue Jays to beat up on some weaker competition, which is something they often struggle with. There isn't much to be excited for when watching the Astros, but their middle infield of Jose Altuve and Jonathan Villar is at least major league quality. 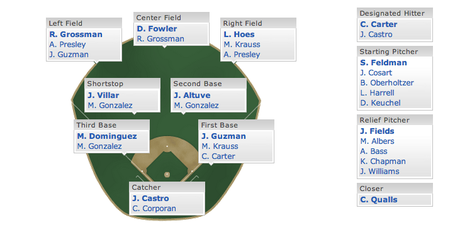 Left-hander Brett Oberholtzer gets the start for Houston tonight against fellow lefty Mark Buehrle. Oberholtzer made his only other start this season in the Astros single loss against the Yankees. In that game he went 5.2 innings allowing five hits and three earned runs with five strikeouts. The 24-year-old mixes in four pitches including a four-seam fastball, sinker, curveball, and changeup. He doesn't blow anyone away, but he does have a good amount of deception in his windup:

Find the link between Brett Oberholtzer and the 2003 Seattle Mariners 11-game winner.
Enjoy the game! Should be a fast one with Mark Buehrle on the mound, although Oberholtzer isn't the quickest.