A couple of left-handers square off in the series finale between the Blue Jays and Angels today as Toronto tries to salvage something (anything) from this four-game set. Mark Buehrle looks to continue his hot start against the reliable C.J. Wilson. The Californian has a 3.21 ERA this season with pretty fair peripherals so it's safe to say that Wilson is on track for another sub 4.00 ERA season (which would be his fifth in a row).

Wilson throws a ton of different pitches including a fastball, sinker, cutter, changeup, slider, and curveball. His curve is his most used off-speed pitch, although his slider is more successful with a whiffs/swing of 50% this season. With all these pitches, Wilson can basically hit any part of the plate with any type of movement, which makes things a wee bit unpredictable: 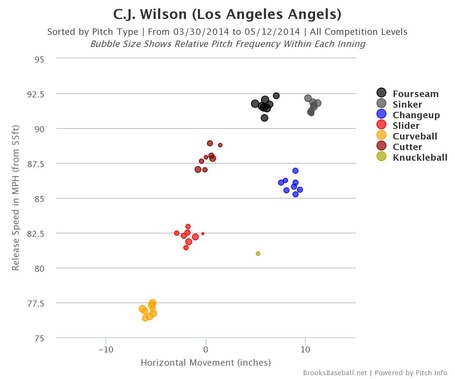 My internet is being silly so this might need to be cut short unfortunately.

Find the link between C.J. Wilson and the NL MVP the year that the film "300" came out.

It's going to be a southpaw duel at the Rogers Centre, with Brett Lawrie returning to the lineup to save the Blue Jays.