Sitting at 20-20, the Blue Jays try to break .500 tonight as they face off (again) against Corey Kluber. Dustin McGowan gets another start for the Blue Jays as they try to figure out what their best group of starting pitchers is. Toronto faced Kluber in Cleveland last month and roughed him up a bit, scoring four earned runs in 6.2 innings, which was enough to win the game. Since then he's lowered his ERA from 5.40 to 3.48 on the back of some monster games against Kansas City, Chicago White Sox, and the Tampa Bay Rays. The games against Kansas City and Chicago featured strikeout totals of 11 and 13, so Corey has put it together a little bit since we last saw him.

Nothing crazy his changed in his pitch selection, although the use of his cutter has increased steadily as the season has gone on (as well as his sinker becoming a four-seamer for one game): 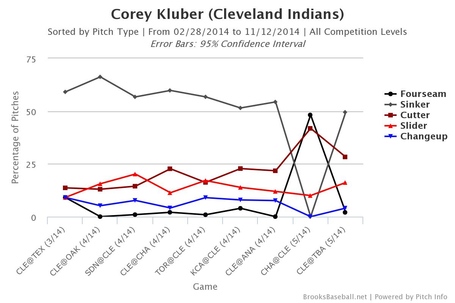 He's still a sinker, cutter, slider pitcher and the Blue Jays should expect nothing straight from the right-hander tonight who has quietly become the Indians' best starting pitcher so far this season.

This lineup is pretty great.

Find the link between Corey Kluber and the Blue Jays minor leaguer who played 93 games with New Hampshire and Las Vegas in 2012.

Corey Kluber has started dominating since last playing the Blue Jays, making this an interesting measuring stick versus a powerful Toronto lineup.