The Blue Jays (23-22) have their first day off in forever down in Boston today as the club prepares for a three-game series against the 20-23 Red Sox, who were just was swept by the Tigers at home.

Down in Buffalo, the Transactions Man Chad Jenkins will be making his first start of the 2014 season. He last pitched on Friday against the Gwinett Braves (the game that Ricky Romero walked nine). In one inning of relief, Jenkins gave up two runs on two hits, including a triple to Tommy La Stella. STELLA!!!!!!!

The Bisons are just a half-game behind the first place Pawtucket Red Sox, and are hoping their bats stay hot today after notching 16 hits in Sunday's game. Not in the lineup today (see below) is Munenori Kawasaki, who has a nine-game hit streak. During that streak, he is batting .357/.419/.607 with seven doubles. I wonder if he's not in the lineup because he is due to head up to Fenway Park... 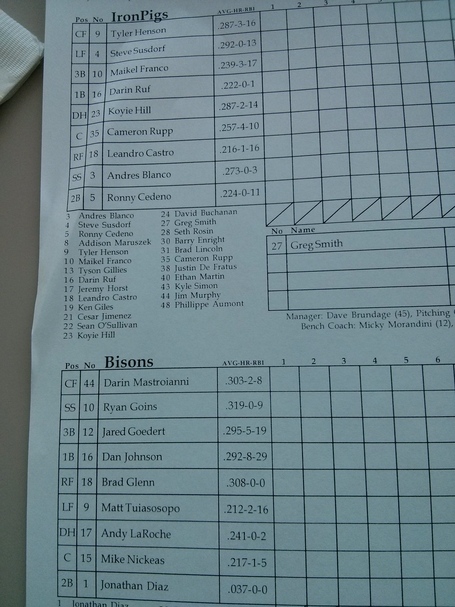 The Bisons are wearing their red alternates today to commemorate Victoria Day. The IronPigs are not wearing their bacon-themed jerseys. Listen live here!