After a Monday off-day, the Blue Jays head to Fenway Park to take on division rivals Boston. J.A. Happ gets another start for Toronto going up against fellow left-hander Felix Doubront. The Venezuelan hasn't had a great start to the season this year, currently sitting at an ERA of 4.54. His strikeouts are down a bit from previous years and it's beginning to look like Doubront might never be more than a back-end of the rotation option.

The lefty throws a four-seamer, cutter, and sinker, plus a changeup and curveball. Doubront isn't afraid to throw his changeup to left-handed batters either, especially ahead in the count or with two strikes which keeps hitters off balance. His cutter is an interesting pitch and has a lot more downward movement than the usual cutter that you expect: 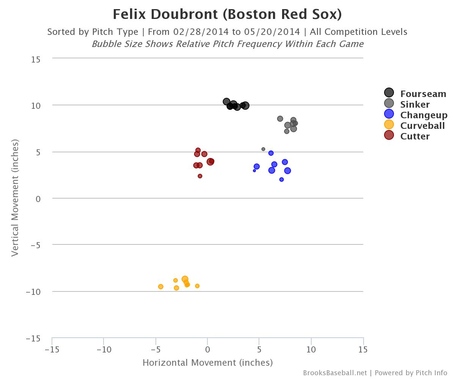 At times this season, Doubront has completely ditched his fastball in favour of his cutter and it seems he isn't 100% confident in all of his pitches at this point in the year. The Blue Jays could see 40 cutters tonight or they could see 5, so the southpaw is not exactly as predictable as someone like R.A. DIckey. 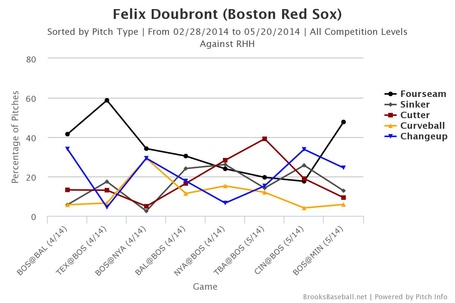 This is one of those game where Adam Lind probably shouldn't play.

Find the link between Felix Doubront and the first baseman of the southernmost AL East team.

A battle of lefties in Boston could end up being a high-scoring shootout.