The Blue Jays tangle with the Oakland Athletics at the Rogers Centre tonight marking the start of an important homestand for the team. The A's are 30-17 this season sitting atop the AL West by 3.5 games, while the Blue Jays are 26-22, which is good enough for a one game lead in the AL East. When's the last time this happened?

Oakland is once again finding success with a fairly underrated group of players who all get on base consistently combined with some pop from their corner infielders, Josh Donaldson and Brandon Moss: 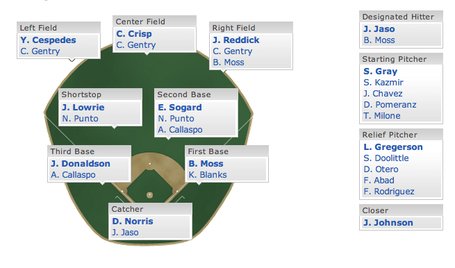 The starter for the A's tonight will be 30-year-old left-handed pitcher Scott Kazmir. As you'll remember, Kazmir was a free agent this offseason and signed a two-year $22 million with Oakland. The Texas native has had a great start to his Athletics career, currently sitting at an ERA of 2.39, although he's only allowed two home runs (4.2% HR/FB) which has made his numbers look a little better than they probably should.

Kazmir throws a variety of pitches including a fastball, sinker, changeup, slider, curveball, and cutter. Being a lefty, his changeup is heavily relied on against right-handed hitters, while his slider is heavily used against same-handed hitters. His cutter, slider, and curveball all have similar horizontal movement, but they vary in how much they fall off the table: 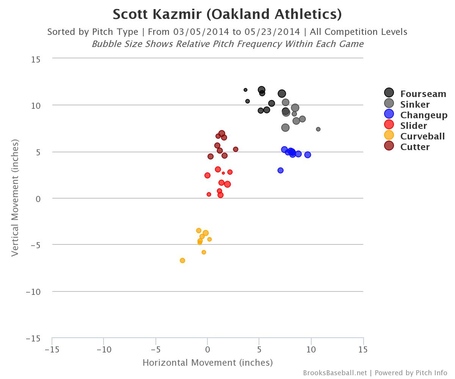 Toeing the mound for the Blue Jays will be Australian right-hander Liam Hendriks, who's had a great start to the year with the Buffalo Bisons. In 48.2 innings he has an ERA of 1.48 and has only walked three batters! Hendriks is a heavy sinker, fastball, and slider pitcher that pitches to contact and hopes the defense backs him up (.234 BABIP in Buffalo this year). There's not a ton more to Hendriks who will being hoping to make a good impression with the big squad to stake his claim for more starts in the future.

Find the link between Liam Hendriks and the wearer of Casey Janssen's jersey number during the season that Buck Martinez was fired as manager.