With the 2014 MLB first-year player draft coming up fast, we take a look at the pitching mechanics of some pitchers that might be injury risks based on their deliveries.

Given how the narrative of the 2014 season, if there is ever a single narrative in any season, revolves around pitcher needing Tommy John surgery, I thought I'd write about the injury risks for some of the pitchers in the upcoming 2014 MLB draft. There was one problem with that idea, however, and it was kind of a big one: I didn't know much about what kind of pitching mechanics are bad for the arm. So, I turned to the internet, and specifically the website Baseball Rebellion, as well as the site of Chris O'Leary to learn more about what is good and what is bad in a delivery.

So what are we looking for? First of all, the idea that the elbow of the pitching arm needs to stay below the shoulder has been gaining ground ever since the aforementioned Chris O'Leary spread the word about the "inverted W". These days, even a pro pitcher like Max Scherzer seems aware of the theory:

Scherzer, though, is meticulous about his mechanics. Unlike others, he doesn't fear the notion of the "inverted W" delivery, but he is careful about not taking it to any extreme.

"The problem is only when your elbow gets above your shoulder point," Scherzer said. "As long as you don't get above that, I still believe that's the most efficient way to throw a baseball."

Okay, he doesn't get the idea completely right - if your elbow is not above your shoulder point it can't be an inverted W - but it's interesting to see how widespread the theory is these days. For a bit of explanation how a high shoulder can hurt an arm, check out this video on the mechanics of Masahiro Tanaka.

A sometimes related problem, that can also occur when there is no "inverted W" action going on, is the problem of the arm getting ready late, forcing the pitcher to compensate in the crucial moment that the pitch is delivered in which results in extra stress on the arm. Third is the problem of not using the whole body well throughout the delivery. When not using the whole body to generate power, extra stress is put on the arm to achieve velocity on its own (through pure arm strength) and that can't be good to keep it healthy.  More video explanations here.

Many mock drafts have the Jays drafting both Jeff Hoffman and Touki Toussaint, and what do you know, both are pitchers! Seems like comparing the mechanics of those two would make for a decent article. Let's introduce them while they lift their legs up to start their delivery: 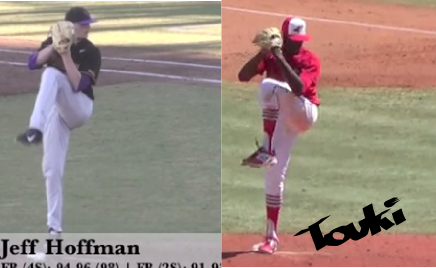 Jeff Hoffman, the East Carolina pitcher profiled here by jays182, wins the leg lifting contest slightly, but Touki Toussaint, former resident of Haiti and current high school pitcher in Florida, is no slouch either. As you can see by the angle of the first base line, the camera angles are unfortunately not the same, but it'll have to do. Let's look at a more relevant part of their deliveries now: 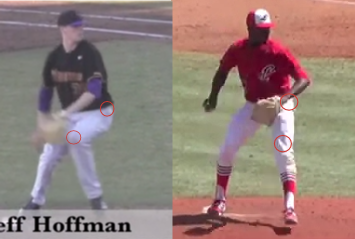 Notice here how Hoffman is leading with his hips, while Touki is leading with his foot, creating less momentum towards home plate. This latter method has been described by Justin Orenduff (former 1st round pick) as "up, down and out" (click the link for explanation of why it;s bad). Also note how Hoffman's upper body is tilted somewhat towards the rubber, while Touki's upper body seems to be at a 90 degree angle to both home plate and the rubber.

Hoffman's body looks like one which has all the parts working together to get as much momentum as possible into the throw. Touki's body looks like the front leg wants to go forward, but the pitching arm is staying behind and the torso doesn't know which side to choose. Hoffman's upper body still has a lot of rotation left to make, which will aid the pitching motion in creating velocity.

I included this one because it is the closest both pitchers come to make the dreaded "Inverted W". However, it is clear from this one that Hoffman's elbow is not in fact above his shoulder (compare the angle with the first base line). Touki's elbow looks a little more suspicious, but again I think the angle could be deceiving here. From a straight-on angle it does not look like his elbow ever gets above his shoulder, and I've looked at it from the available angles countless of times now. Toussaint did show an inverted W (1:20 in that clip) last year, but seems to have changed his delivery this year.

This is the one thing to dislike about Hoffman's delivery. At foot strike, his pitching arm is not yet in the "ready" position (approximately indicated by the green line), which possibly creates a problem for him. Toussaint's got the same problem, to add to the relative lack of potential upper body rotation to help the arm. This the position I've looked the most at (for almost all HS pitchers in the various top 100s), and these are not the worst timing problems I've seen. My lack of expertise means I can't possibly speculate if this is just a minor timing problem, or if this is a serious injury risk.

While I don't know how detrimental it is to leave one's pitching arm side foot on the rubber, Chris O'Leary doesn't seem to like it. Note that Toussaint's glove side knee is not actually locked, and I think he finishes his delivery rather well.

Jeff Hoffman has already had Tommy John surgery, so injuries might be a reason for teams to stay away. However, with his build and his delivery, I don't think he's that much more at risk of repeated injury than most other pitchers. I think the biggest question is with his age, lack of track record, and successful recovery chance. No doubts about his upside as a pitcher. Touki Toussaint has a more problematic delivery, but the kid is seen as very athletic and has already changed his delivery significantly. The team drafting him could do so with the intention of changing his mechanics to mechanics that are actually good for him. However, there's a lot of "ifs" for Toussaint, and those uncertainties would make me hesitant to pick him as high as #9 or 11.