In the second game of this weekend series, R.A. Dickey goes up against our old friend Jesse Chavez. The right-hander has put it all together in his second year with Oakland currently sitting at a 2.54 ERA thanks to a career-high strikeout rate (24.7%) and a career-low walk rate (6.5%). He's faced some below average offences so far (Houston twice, Minnesota, and White Sox) so there's a chance his numbers are a bit of a mirage, but he's still been MUCH better than he was during his time in Toronto.

He mainly throws a sinker, changeup, curveball, and baseball's trendy pitch of the year, a cutter. Now if you have a great memory, then you're probably thinking that Jesse Chavez isn't throwing the same stuff he did during his stint in Toronto. In which case you'd be right! He's ditched his four-seamer for a sexier cutter and stopped throwing his slider (although his old slider is similar to his new cutter): 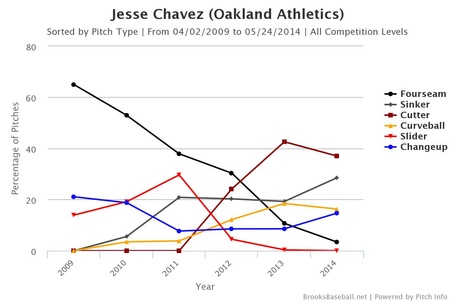 Carson Cistulli took a look at Chavez in a cool piece at FanGraphs last month so it wouldn't hurt to read that. If you'd rather just look at the fancy summary of Chavez's pitches, then here you go: 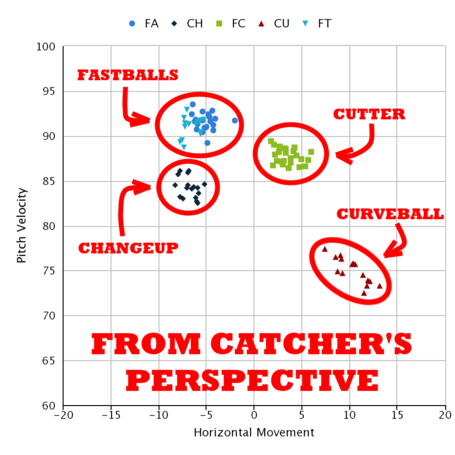 As first pitch quickly approaches, we'll end off with a GIF from the FanGraphs piece of Chavez's cutter that has taken the place of his slider and even overtaken his four-seamer in terms of usage.

Find the link between Jesse Chavez and the author who wrote under the pseudonym Douglas Ring.

Billy Beane magically made Jesse Chavez good at pitching and the dome will be open for an R.A. Dickey start.