Division rival Tampa Bay comes into the Rogers Centre tonight to kick off a three-game series with the Blue Jays. The Rays win streak of four games is impressive, but not quite as good as the six game streak that Toronto is riding. Canadian lefty Erik Bedard opposes Drew Hutchison tonight in a game that will end one of the aforementioned winning streaks. Bedard has a 2.63 ERA, although he has an xFIP of of 4.75 thanks to only allowing one home run in 37.2 innings pitched, which is bound to come crashing down eventually.

As mentioned by Woodman663 in another thread this morning, there's some pitch identification issues with Erik Bedard on the various tracking websites. Basically Bedard has a fastball and sinker along with a rarely-used cutter all thrown in the high-80's. His off-speed pitches are a big curveball and likely a changeup with some glove-side run. The changeup is actually considered a slider on Brooks Baseball, but if this is the grip he uses then it's safe to say it's a not a slider: 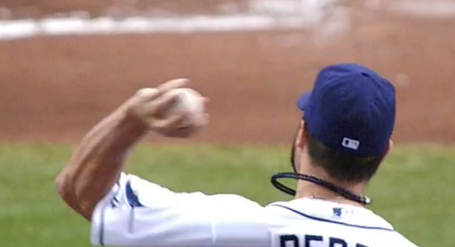 You can see the weird changeup (called a slider) movement in chart form as well: 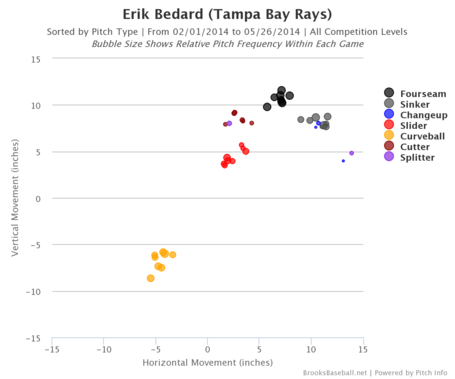 Find the link between Erik Bedard and the Red Sox player added to the DL on Saturday.

Erik Bedard returns home looking to continue the Rays winning streak by keeping nearly every single ball inside the park.