Summer is right around the corner, which means lots of baseball-related events!

For a uniform geek like me, news that the Buffalo Bisons will be wearing special jerseys for Blue Jays Weekend (June 21-22) was really exciting. Today the Jays' triple-A affiliate revealed a Blue Jays-inspired "split-letter" cap as well as this siiiiiiccccckkk pullover-style faux "affiliation throwback" uniform that is designed based on the Blue Jays' 1977-1988-era home uniforms. 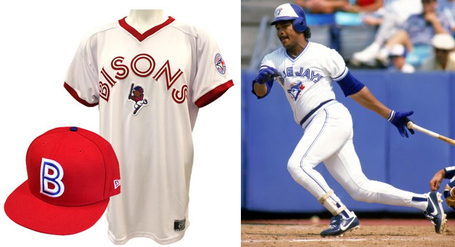 Like the Blue Jays' original uniform top, Buffalo will have their team name written across the chest in an arc and their logo centred right below the letters. Also, according to Bisons PR guy Brad Bisbing via email, the uniform top will feature just the players' number on the back (or in geek-speak "NNOB" for "no name on back")--the Blue Jays did not have players' names appear on the back of their home uniform from 1977-1979.

The Bisons' uniform will feature solid-red collar and cuffs rather than the tri-colour striping used on the old Jays uniform. The left sleeve will feature the Blue Jays' primary logo, while the right sleeve will have a patched with crossed American and Canadian flags. 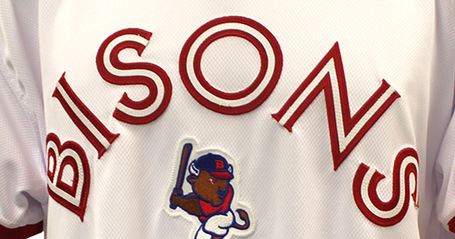 A close inspection shows that the "BISONS" split-lettering in front of the uniform uses the same typeface as the current Blue Jays uniforms rather than the more rounded letters of the original uniforms. It was also confirmed via email that the player's number on the back will be in the same style, also in red. The Bisons' current alternate uniform set already uses the modern Jays-style split numbering. 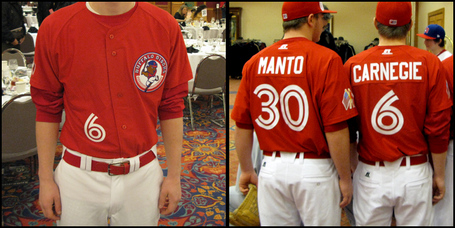 You can see the Bisons wearing these uniforms against Twins' affiliate Rochester Red Wings during their "Blue Jays Weekend" event on June 21 (doubleheader of two seven-inning games) and 22. Blue Jays alumni Fred McGriff and Kelly Gruber will be at Coca-Cola Field. Both days will feature giveaways: on June 21 the first 3000 fans will get a t-shirt, and on June 22 the first 3000 will get an Ace & Buster mascot tumbler.

There is also another major baseball event that weekend: the Canadian Baseball Hall of Fame will be holding their annual Induction Day in St. Marys, Ontario on June 21. A "baseball street party" will start at 9 am with induction ceremony itself beginning at 1 pm, and the Hall will honour Tim Wallach, Dave Van Horne, Jim Ridley, and Murray Cook with Rod Black emceeing. I went last year and had a very good time, so I plan on making a return trip this year.

Closer to Toronto will be the third in a series of PITCH talks. If you hadn't heard about the first two events, this is a one-of-a-kind event where fans gather to listen, talk, and discuss baseball. On June 2, long-time baseball writer (and former Montreal Expos PR guy) Richard Griffin of the Toronto Star will be joined by his colleague Brendan Kennedy, his former colleague Cathal Kelly now of the Globe & Mail, as well as the hardest-working man on the Blue Jays beat, TSN's Scott MacArthur. Joining them will be the Canadian Baseball Network writer and Blue Jays statistician Alexis Brudnicki and the guy behind the highly creative "Cashew Mirman" videos. 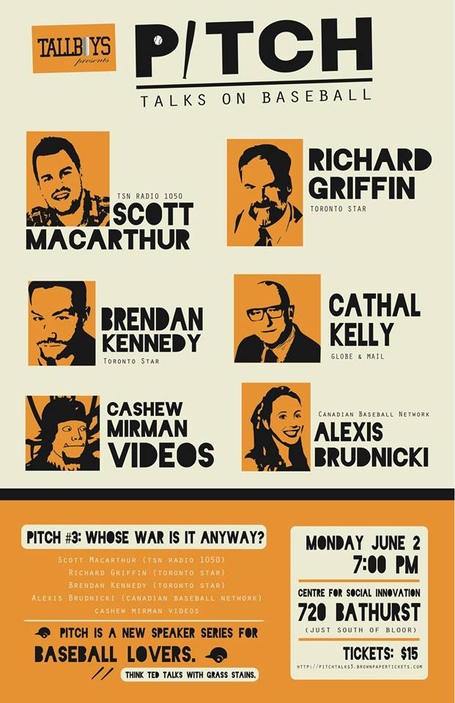 The speakers have a topic base for their talks, but things get very interesting when we get into the question-and-answer discussion portion (audience participation is highly encouraged). Tickets are normally $15, which is already a great deal, but use coupon code "minorleaguer" here and save yourself $5 (yes, I will be there; yes, I will accept tips).

The organizers will host another PITCH talk later in June with a fantastic lineup of speakers that will be revealed on June 2.

Finally, on June 14 you can cheer on the Blue Jays against the Orioles for a good cause from a private event space at Labatt Breweries on Queens Quay West in Toronto from 3:30 pm - 7:30 pm. The Jays Care Young Professionals committee has organized a fundraising campaign called the "ChangeUp Challenge" to support the building of the Bridletowne Circle YMCA in northwest Scarborough. Tickets can be obtained for a minimum donation of $40.

So a lot is going on this month--hope you can go out to a few of them!