This new Scott C. guy is pretty tardy with the game previews isn't he? The scuffling Kansas City Royals come into the Rogers Centre tonight to take on the not scuffling Blue Jays. Let it be known that yours truly returned from vacation on May 18 and Toronto has not lost a game since I continued watching them (link to Paypal here). R.A. Dickey gets the ball tonight to face off against former Tampa Bay Ray James Shields. The righty has been solid for the fourth year in a row, making the Wil Myers trade look not as completely horrible as it actually was. Although his ERA's have varied in the past few seasons, his FIP (2011-2014) certainly hasn't:

Shields throws a fastball, sinker, changeup, curveball, and cutter all pretty heavily so he's got a lot of different ways to attack hitters. His changeup has been brutal against hitters on the both sides of the plate like it always is, with 32.59% whiffs/swing this season. It's got serious movement on it and keeps hitters from sitting on his low-90's heater: 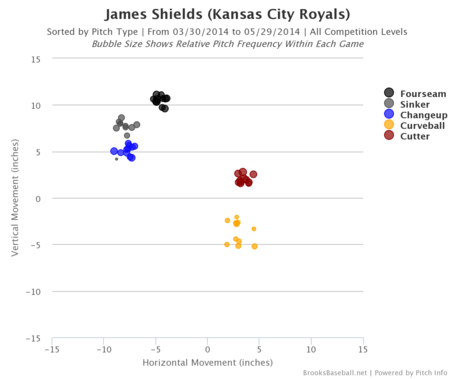 Find the link between James Shields and the greatest hitting coach in the planet!

It's easy to get carried away with James Shields' changeup, but the Royals aren't hitting at all.