After last night's swell finish to the game the Blue Jays try to get back on track this evening against Pittsburgh. R.A. Dickey faces off against Francisco Liriano in the middle game of a three-game series. The left-handed Liriano has been okay this year with a ERA and FIP BOTH equal to 3.97 plus a K/9 of exactly 9.0. The Dominican was battling some flu issues in the past week or so that caused him to leave a start early, but it seems he's ready to get back on the mound tonight.

Francisco Liriano is a pretty simple pitcher, throwing strictly sinkers and sliders against lefties, while also mixing in a changeup against right-handed batters. His slider is definitely his bread and butter and he uses it whenever he needs a strikeout. Although he's fairly predictable, batters can't seem to hit his slider even when they know it's coming whiffing on 40% of their swings. Even the movement on his pitches isn't that impressive: 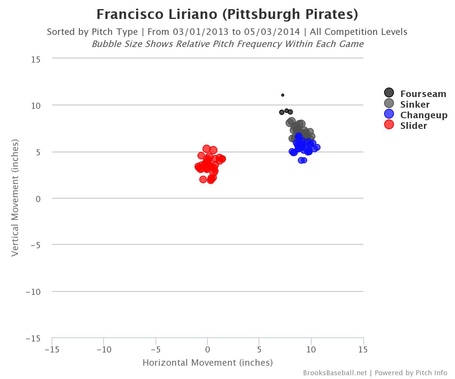 Normally I would be afraid of such a good off-speed pitcher against the Blue Jays fastball hitters, but Edwin Encarnacion has two home runs in four at-bats against Liriano and Jose Bautista has been fairly successful as well in an EXTREMELY small sample. You can see how Liriano gets right under the hands of righties with his slider: 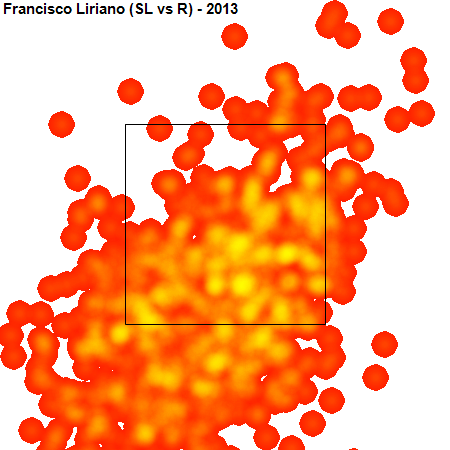 I'm beginning to get very confused with who's on this team anymore. Unfortunately Josh Thole is going to have to face the tough lefty due to R.A. Dickey being on the mound. Apparently Brett Lawrie at second is a thing now too...

Find the link between Francisco Liriano and a former Blue Jay who appeared in 11 games for Toronto in both 2011 and 2012.