The Blue Jays look to salvage something (anything!) from their trip to Pittsburgh this afternoon as they finish off their series with the Pirates. Dustin McGowan gets the start today, which will have to go well if he hopes to stay in the rotation any longer. First-year Pirate Edinson Volquez opposes him, after signing a one-year $5 million contract with Pittsburgh in free agency this winter. The right-handed Dominican has been pretty solid this year, thanks in large part to finally finding some control. With a BB% usually hovering in the mid-teens, a 4.5% rate this year has kept the basepaths much clearer, although a .236 BABIP certainly doesn't hurt either. A problem that may be lurking beneath the surface is that Volquez is only striking out 13.6% of hitters which is way down from his 20% career average, likely stemming from the fact that hitters are swinging (and not missing) at nearly half of his pitches, which is up from the usual 40% swing rate against him.

Edinson Volquez mainly throws a sinker, curveball, and changeup as well as occasionally featuring a straighter four-seam fastball as well. His curveball is really the only pitch with serious movement, which makes it look like a loner on a chart like this one: 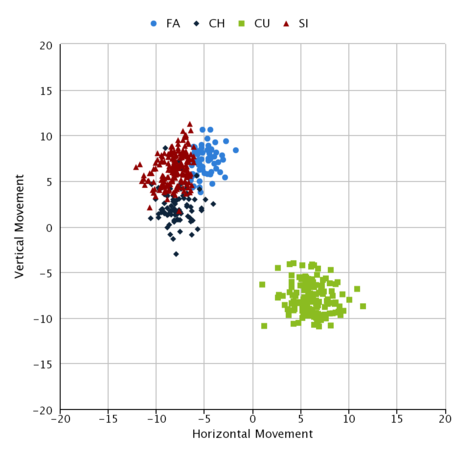 Volquez isn't afraid to throw his changeup to hitters on both sides of the plate and he isn't even afraid to throw it in the exact same spot regardless of who he's facing: 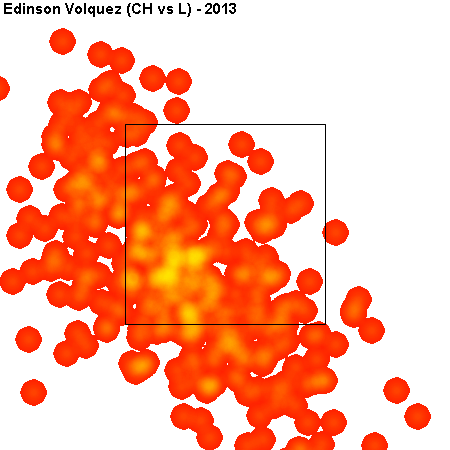 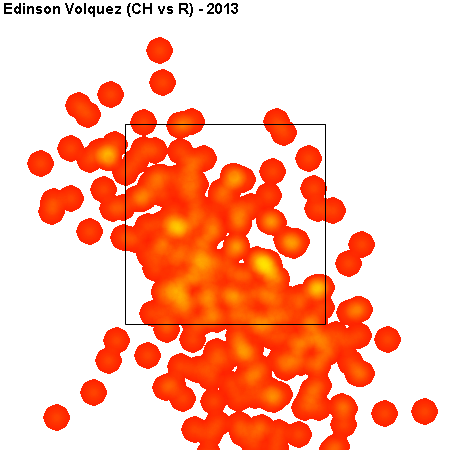 Anyway, with the way Volquez is pitching this season, balls will be in play and it's up to the baseball gods to decide how it turns out. Some BABIP regression for the Dominican would certainly be nice with the way the season is going right now.

Find the link between Edinson Volquez and Roberto Hernandez.

Bad things are going to start happening if the Blue Jays keep losing games, so hopefully that doesn't happen today!