This team was supposedly toast last week and now they're going to the playoffs. I can't keep up! The Blue Jays look to really stick it to the Phillies tonight and win the best-of-seven series in only four games tonight at the Rogers Centre. Pitchers with their initials as names is the theme tonight as R.A. Dickey faces off against A.J. Burnett. That Burnett guy used to play for the Blue Jays if you weren't aware. His departure wasn't the smoothest thing in the world. He's been lights out this year in his first year with Philadelphia pitching to a 2.06 ERA although there's a .258 BABIP and a 7.4% HR/FB that makes things look a little better than they are.

If you've forgotten what Mr. Burnett throws since his time in Toronto, he features a fastball, sinker, knuckle curve and changeup. Brooks Baseball is not working at all right now, so we'll have to take our business elsewhere. Something that seems like it could be an issue for Burnett if batters can identify it is that Burnett's release point for his off-speed stuff is slightly different than for his fastballs:

The knuckle curve is really the pitch that causes problems for hitters and is what Burnett will throw when he needs a whiff or some weak contact. A timely article about knuckle curves is up at FoxSports.com and is quite an interesting read. Burnett's knuckle curve is rarely is thrown for a called strike, but is often swung through due to it's late break and accurate command:

It's a tough pitch as it breaks hard down and away against right-handers sometimes even being thrown in the dirt: 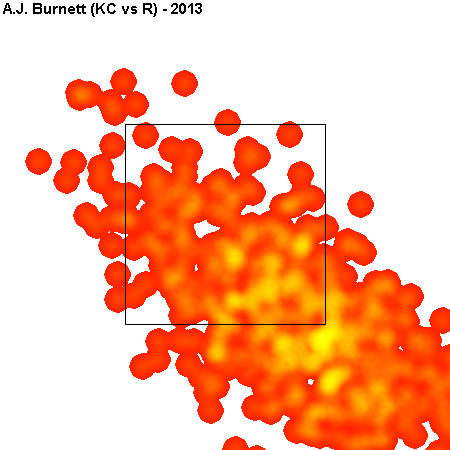 Find the link between A.J. Burnett and the father of the Mets left fielder.

Blue Jays can't swing at Burnett's knuckle curve if they want to win, R.A. Dickey needs to show that a real knuckler don't need no curves.