The Blue Jays welcome the Angels to the Rogers Centre tonight to start a four-game weekend series. Garrett RIchards gets the start for Anaheim against Dustin McGowan who is always one bad start away from losing his rotation spot. Watching the Angels is always fun because they happen to have Albert Pujols and Mike Trout who have a combined WAR of 3.6 already this season.

Richards is normally pretty 'meh' even with his high velocity, but he's had a hot start to the season and has an ERA of 2.84 thanks in large part to a 25.8 K%, which is about 10% over his career average. He's also only given up only one home run (3.8% HR/FB), which is bound to straighten out by the time the season is over. Richards hasn't done anything crazy this year to turn around his career, with his mid-90's fastball, sinker, and slider still being his main pitches: 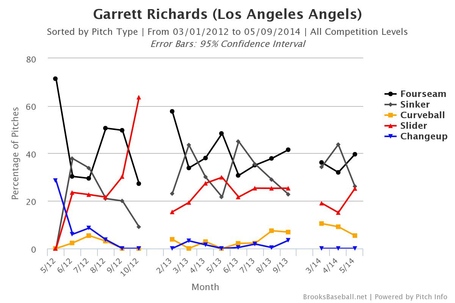 According to opposing players though, Richards is a tricky pitcher to face off against:

Every time Trout reaches first -- and that happens a lot -- he asks the opposing first baseman about his own starter, and they're usually most impressed by Richards' stuff.

"I haven't had one person say it was pretty easy to hit," Trout said. "It's nasty."

With this sort of velocity, I can understand why it's a chore to go up against him: 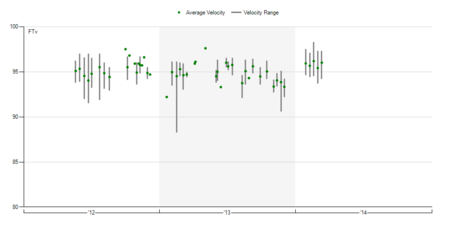 This is the best Blue Jays lineup in a little while, other than the last two spots.

Find the link between Garrett Richards and the Blue Jays pitcher who was traded for Danny Farquhar.

Garrett Richards has been both better (25.8 K%) and luckier this year (3.8% HR/FB), making this an interesting pitching match-up with Dustin McGowan.