The last game of a four-game weekend set sees the Blue Jays trying to split the series with the Kansas City Royals. Mark Buehrle faces right-hander Jeremy Guthrie who currently has a 4.14 ERA on the season. The Oregon native started against the Blue Jays on May 1st going six innings allowing eight hits and four earned runs in a 7-3 loss for the Royals. It looks to be another year of an average mid-four ERA for Guthrie who has made a career of being a reliable back-end of the rotation starter.

Guthrie throws mainly a fastball, changeup, and slider combination with a few curveballs as well. As with James Shields a few days ago, Guthrie is not afraid to throw his changeup to hitters of either handedness, with 23% of his pitches against left-handed hitters being changeups and 20% for right-handed hitters. The main difference for Guthrie is actually how he throws his slider almost exclusively to right-handers, while his curveball is mainly saved for opposite-handed batters. As you can see, Guthrie's slider has a lot of vertical break as well, making it similar in appearance to his curveball, but about 10 mph faster: 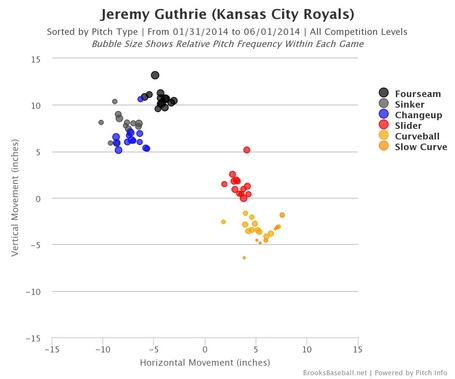 Find the link between Jeremy Guthrie and former Blue Jays radio analyst who now works for the Astros broadcast team.

The Blue Jays try to salvage a split with the Royals, going up against the always reliable Jeremy Guthrie.