The Twins take on the Blue Jays at the Rogers Centre again this evening, as J.A. Happ goes up against right-hander Kevin Correia. If you have a really good memory, then you'll recall that this exact same pitching matchup took place on September 7th of last season, with the Blue Jays winning 11-2 thanks to a five-run first inning with a few home runs against Correia. This year Correia has a 6.11 ERA, but a FIP of 4.21 that is in line with his career average. The problem has been a BABIP of .343 and a 60.3% strand rate, which are magnified in Correia's case because he mainly pitches to contact.

The California native throws fastballs, sinkers, and cutters mainly with changeups and curveballs making up his off-speed stuff. He relies pretty heavily on his defence because there isn't a lot of whiffs being produced with his fairly mediocre stuff. Against same-handed batters 86% of his pitches thrown are either fastballs, sinkers, or cutters that all have pretty similar velocity making it a challenge to fool the hitters with only a little bit of horizontal movement: 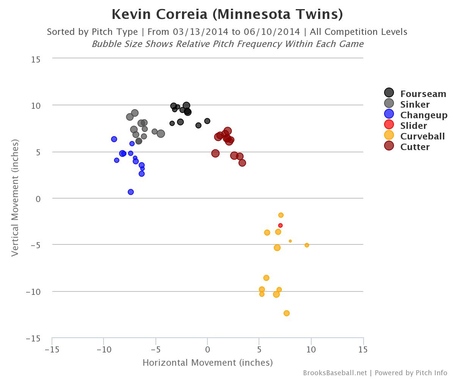 Kevin Correia is pretty split neutral so the Blue Jays should just run out the best lineup they can.

Find the link between Kevin Correia and the Blue Jays 2014 draftee "ZZ".

Pitching matchups don't get more boring than this.