The Blue Jays look to avoid losing two straight series by winning an afternoon rubber match against the Twins today. An interesting pitching matchup sees youngster Marcus Stroman face off against the righty Phil Hughes in a Wednesday getaway game with a first pitch of 12:37. Hughes faced the Blue Jays in his third start of the season, going five innings allowing four earned runs (which he did three times in a row to start the year) and striking out seven hitters. Since that game Hughes has only gotten stronger, allowing more than three earned runs only once, in his last start against Houston.

As was mentioned in the April 15 preview, Hughes has scrapped has poor slider in favour of a cutter and it's paid off. His walk rate is at a career low (2.6%) and the fly ball pitcher has allowed fewer home runs than usual, in part due to a 6.8% HR/FB rate. He's also started to pound the zone with his simple fastball and cutter approach, keeping hitters on their toes and never giving them a chance to get comfortable in the batter's box. You can see how his cutter abruptly replaced his slider at the beginning of this season: 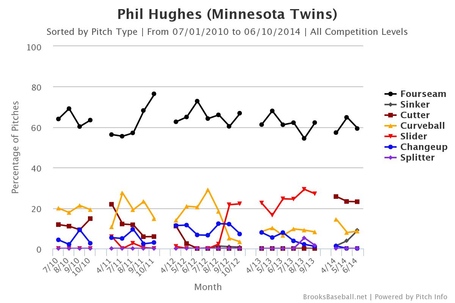 So it looks like Hughes has finally found a collection of pitches that work for him. Even though he's pounding the strike zone, the righty seems pretty opposed to challenging left-handed hitters inside, preferring to stay high and away. 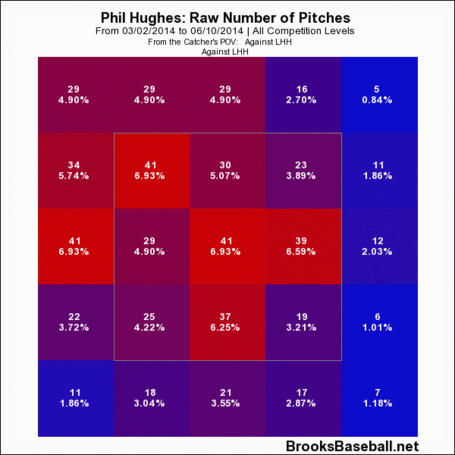 Phil Hughes is absolutely owning left-handed hitters this year (.174 BA against), but it's still a pretty small sample size to get too crazy about the reverse splits.

Find the link between Phil Hughes and the Blue Jays hitter who is improbably leading the team in strikeouts.

Phil Hughes has ditched has slider and got a lot better at pitching, while Marcus Stroman has kept his and been just as good in his first two starts.
Here's the current Find The Link standings:
Enjoy this afternoon's game!