A big road trip gets started tonight in Baltimore as the Blue Jays face the Orioles. Staff ace Mark Buehrle gets the start for Toronto against highly-rated 23-year-old Kevin Gausman. After a rough rookie season Gausman has only got two starts at the major league level in 2014, most recently five days ago on June 7th. In that start against Oakland, the righty went seven innings allowing four hits and one earned run.

The LSU grad was drafted fourth overall in the 2012 draft and moved quickly through the Orioles system, making his debut against the Blue Jays on May 23 of last season. He throws his fastball about 70% of the time, averaging about 96 mph, while his slider and splitter are his main off-speed pitches. He messes around with his pitches a little bit and sometimes throws a huge sinker and a changeup that's a little less volatile than his splitter. 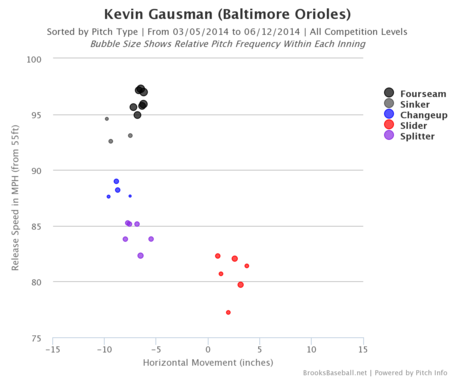 While his fastball doesn't get many whiffs over half of hitter's swings against the heater are fouled off thanks to the massive velocity coming out of the 6'3' frame of Gausman. The splitter/changeup is his go-to pitch against lefties and he tends to throw it ahead it the count to get a swinging strike.

All in all, if Gausman is spotting his fastball then he is very difficult to hit against. On the other hand, if the Blue Jays are zoning in on his fastball, then Gausman will struggle to fool them with his off-speed pitches.

Find the link between Kevin Gausman and the strikeout leader of the Cubs pitching staff.

Kevin Gausman could be good or he could be bad, while Mark Buehrle will probably be good.