Sometimes, articles don't need many words. Sometimes, pictures do all the talking.

Share All sharing options for: Brutal Umpiring Job in Baltimore?

As a former football (soccer) referee, I'm usually one to defend the lads charged with making difficult decisions using only the eyes. When I hear people talking about the bad job an umpire is doing, I usually look up the strikezone map and I see one of two things: 1) the claims are largely exaggerated, and there are lots of close pitches that could've gone either way or 2) the strikezone was off a bit, but at least both teams had to deal with that. Not so in Baltimore yesterday. 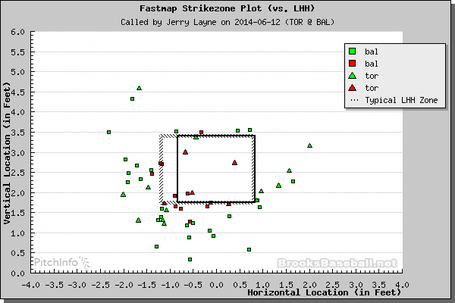 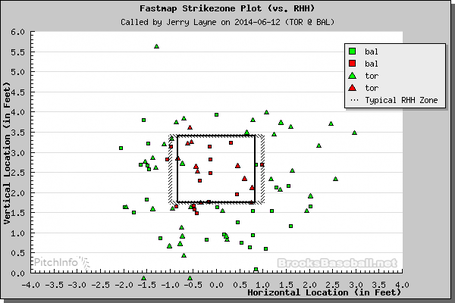 Click to enlarge. With thanks to the awesome site Brooks Baseball.

Umpire Jerry Layne gave eleven (!) extra strikes to Baltimore pitchers, taking away one outside pitch to a righty that is usually called a strike. To Blue Jays pitchers, he gave just one extra strike, taking away three pitches that would have been strikes when the home team had thrown them.

Could this be Dioner Navarro's pitch framing (he's supposedly been quite bad at it this season), compared to better framing by O's catcher Caleb Joseph? Possibly. But this is also the umpire who had a horrible strikezone in a game during which he threw out Scott Kazmir, and a game on June 8th between the Royals and the Yankees, with again, a horrific zone. Quite telling is that when I was looking for the strikezone maps of those games, I went to the wrong graphs first, and thought "wow, this is not so bad, quite good actually" and was thinking of scratching this post until I saw it was a different game, different umpire. All credit to Mike diMuro for his strikezone in the Yankees-Royals game the day after Jerry Layne was umpiring. Thing of beauty.

But I digress. The Blue Jays will need to hit better, no excuses. But yesterday, a difficult job (Gausman's stuff is pretty good) was made even more difficult for them by some really poor work by the home plate umpire. The best way to respond would be to have the bats wake up against Ubaldo Jimenez and give Drew Hutchison some nice run support. That would be easier on the fans' nerves, I'm sure.