The Blue Jays roll into the Bronx to take on the Yankees in a nice little mid-week series the next few days. New York is currently second place in the American League sitting at 35-33, which is good enough for 4.5 games back of the division-leading Blue Jays. The Yankees have faced a few pitching injuries to players such as CC Sabathia, Ivan Nova, and Michael Pineda so they've done pretty well grinding through with some lesser-known starters. Today sees the leader for AL Rookie of the Year in Masahiro Tanaka go up against fellow first-year starter Marcus Stroman. The Blue Jays faced Tanaka in his first major league start (the Blue Jays home opener) and he's only gotten stronger since then. Sitting at a ridiculous ERA of 2.02, Tanaka has a K-rate of 28.4% and a BB-rate of 3.9% and has already amassed a fWAR of 2.8 WAR. Aside from playing for the evil Yankees, the Japanese import has been an absolute joy to watch.

As we learned going into the home opener, Tanaka mainly throws a fastball, slider, and splitter with cutters, curves, and sinkers all making the occasional appearance as well. He throws the splitter fearlessly against hitters on both sides of the plate and no one has been able to touch it, leading to a whiff/swing rate of 48.67%. His slider is just as nasty against right-handed batters getting nearly the same amount of whiffs as the splitter. It's no surprise then that hitters are struggling so much against Tanaka, when they have to be prepared for his splitter falling off the table or the slider breaking down and away from them: 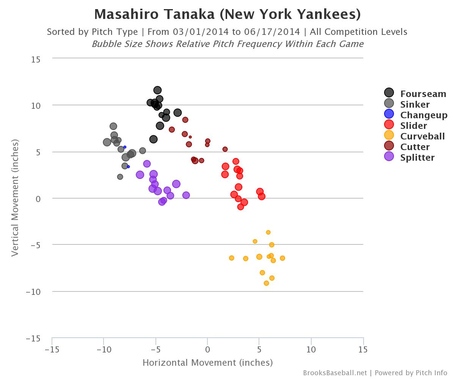 This has to be one of the nastiest pitches in the league:

It's not 100% clear what the roster move will be before this series gets underway, but it seems the Blue Jays want Juan Francisco on the bench.

Find the link between Masahiro Tanaka and #55 of the Midland Rockhounds.

A battle of rookies sees Stroman make his Yankee Stadium debut against the man with the nasty splitter and slider in Masahiro Tanaka.