Toronto may be known as a hockey town, but there are many people in the city who are still deeply involved in baseball in some way. Today we profile Kevin Kennedy from Seaton Village.

Share All sharing options for: Kevin Kennedy: Pitchman for Baseball Events in Toronto

Sometimes, a brilliant idea may seem obvious in retrospect, leading to the question, "why hasn’t anyone thought of it before?" But what we don’t know is how many people have gotten a similar idea but failed to do anything with it. Many people can recognize problems, some can conceive of novel ideas to solve them, but ultimately only few actually try these solutions, and an even smaller number succeed.

Back in 2011, Kevin Kennedy recognized a problem while playing soccer with Ross Simnor, the owner of Opera Bob’s Public House: there was no good place in Toronto to watch a baseball game. So he thought about creating an event where, during the baseball season, Blue Jays fans can gather at a bar to watch an away game together with the sound on, and in the offseason, the same fans can escape the winter by watching vintage games and baseball films. And all over a glass (ok, glasses) of craft beer. He wanted to bring together the community of Blue Jays fans in Toronto.

Then he went to create the Jays Days Beer Club ("because it rhymed"), and Simnor hosted it at his Dundas-and-Ossington bar.

"In Toronto, you get a bad deal with our ballpark and the atmosphere, so the intention was to create a better atmosphere for game watching," Kennedy tells Bluebird Banter in an interview last month, "it’s very simple and very selfish on my part—I’ve been to Wrigley and other ballparks where the atmosphere was better so I wanted to create that environment [here]."

When Kennedy and some friends and family bought Tallboys Craft Beer House in the fall of 2012, Jays Days moved two kilometres north to the new establishment. There were some very well-attended Jays Days events, especially after Blue Jays general manager Alex Anthopoulos pulled off two blockbuster trades with the Marlins and the Mets that winter. The screening of Knuckleball, a baseball documentary featuring newly-acquired Cy Young award winner R.A. Dickey, attracted a standing room-only crowd. It was on a Thursday night in January when it was minus-13 degrees outside. Even Tim Langton, the man who introduces every player over the public address system at the Rogers Centre, was there to see what the new Blue Jay was all about.

"The baseball team I have no control over, so as an event planner, putting on an event where you don’t have control over the entertainment or product is scary."-Kevin Kennedy

Unfortunately, the new Blue Jay—in fact, all the new Blue Jays—ended up being disappointing in one way or another. The 2013 season, in which Toronto was viewed as World Series favourites by many, ended up being one of the most horrible seasons in recent memory. The subpar play on the field led to subpar attendance at Jays Days, particularly towards the end of the season.

Of course, that just led Kevin Kennedy to think of a new idea.

"We don’t have a solid fanbase—I mean, there is a hardcore solid fanbase—but there isn’t that ‘win-or-lose we’re gonna be there’ Toronto Maple Leafs fanbase," Kennedy said, "so Jays Days is very much a vulnerable event based on the success or failure of the team.

"I was always thinking about a way to create a baseball event that wasn’t vulnerable to the success or failure of the baseball team. The baseball team I have no control over, so as an event planner, putting on an event where you don’t have control over the entertainment or product is scary."

That thought was mulled over the 2013 offseason and by the start of the 2014 season, it had been formed into PITCH, a series of talks about baseball loosely based on the very successful "idea spreading" TED Talks (in fact, the official tagline of PITCH is "Think TED Talks with grass stains"). PITCH is focused on baseball and the people who are involved in the sport rather than on the Blue Jays. Of course, being a Toronto event, the Blue Jays are mentioned quite often, but they are not what the events are centred on. Kennedy’s aim was to create a baseball-themed event where he is able to manage the entertainment and content.

Through a combination of his personal network and cold emails, Kennedy was able to assemble a solid lineup of speakers for the first PITCH, including the National Post’s John Lott and Sportsnet’s Shi Davidi. It was loosely structured, the speakers each made a short presentation before opening the floor to the approximately 100 fans in attendance to ask questions and join in the discussion. Unlike the typical questions heard on PITCH #2 guest Mike Wilner’s Blue Jays Talk post-game show, the questions asked at PITCH were mostly intelligent and well thought-out. Kennedy was not surprised by the type of fans who came out that Monday night in April.

"When I thought about who I was going to book and what I was going to charge and when I was going to do it, it sort of works as a natural filter. You have to actively go to a website to buy tickets, it’s on a Monday night, there are no players, so it sort of filters out anybody that is not very interested in whatever the topic of the day is. These guys really care and they really want to be involved in a conversation."

"I don’t mean to filter out the casual fans or the obnoxious fans," Kennedy was careful to add, "the location, the venue, it’s not by accident—it appeals to a certain group of people." 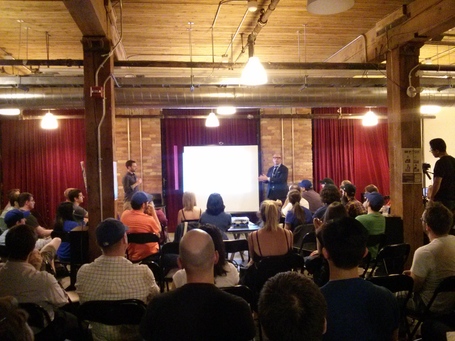 Brendan Kennedy and Cathal Kelly speaking to a packed house at PITCH #3. (Photo by Minor Leaguer.)

What made these PITCH events really stand out were the conversation and the interaction between the speakers and the audience. The first three were held in a brick-and-wood events room at the Centre for Social Innovation, there was no stage that separated the speakers from the crowd. The most sophisticated equipment was probably the microphones in the speakers’ hands, or maybe a digital video projector. There was no electronic queue for questions, the attendees just raised their hands.

"I like events that are not too produced, don’t have too much of an agenda. I like an underproduced event. Maybe it’s because I don’t have a huge budget for high production, but allows for people to, at once, feel comfortable in the environment and they can look around and say, ‘look, there are 100 people here, we’re all in the same boat, I’m not afraid to ask a question.’"

The reaction from the first event was very positive—Lott and Davidi did a fantastic job talking with the fans about both the 2013 season and the one that had just begun. Their response to the fans' questions were nuanced and informative.

"It was really important to get guys like Shi Davidi and John Lott [for the first PITCH]. I lucked out getting them first because they set the tone for the rest of them," Kennedy recalled.

He credits them for building PITCH’s credibility, allowing him to secure Canadian sportscaster Dan Shulman to appear at the second PITCH. Sitting at the front with Mike Wilner, the voice of ESPN’s Sunday Night Baseball told stories and spoke with fans for an hour-and-a-half. A team of Blue Jays beat writers, from the seasoned (the Toronto Star's Richard Griffin and the Globe and Mail's Cathal Kelly) to the relatively new (TSN's Scott MacArthur and the Star's Brendan Kennedy), were at PITCH #3 to talk about life on the beat and why they continue to speak with players despite formulaic answers.

"I haven’t been this excited about an event in a long time. This event, and the feedback I’ve gotten, and how honest this event is. It requires very little marketing, it’s been almost just word-of-mouth spread."

When asked about scaling up PITCH, Kennedy was reluctant to go too far beyond 200 attendees in order to keep the feeling of intimacy. After all, going back to the soccer pitch in 2011, his idea was to build a community of people who are enthused about the Blue Jays and baseball.

"The core element of PITCH is that you can get an uncensored view and that accessibility to people, and not only to the people who are speaking—the guy beside you too. It’s that community that draws us together."

"Without Jays Days there would be no PITCH," Kennedy pointed out, "because it exposed me to this community of a little bit more sophisticated fanbase. It’s also more co-ed, and I like that aspect of it instead of being a boys’ club."

At the beginning interview he was asked the question: "Who is Kevin Kennedy?" He thought about it for a bit and answered that he is an entrepreneur who likes to create things from scratch, he is involved in the music industry, he is an event planner, and he helps out at his bar. Looking in the past, he used to work at a bank, he taught in Taiwan, he wrote for The Hockey News. It wasn’t until the end of the chat when he was able to focus an answer to that initial question.

"To go back to your question—Kevin Kennedy is a community builder. I build communities around ideas and initiatives. I have good resources and I’m not afraid to use them. I’m trying to draw people together and to have an impact on this city. Not some kind of huge impact, but I want to leave this city, whenever I do leave, better than I found it. Successful or not, any events around baseball and bringing us altogether will make everybody happier and make an impact on people— a very subtle impact—but I think it’s important."

Having a publicly-accessible series of interactive talks about baseball is a brilliant idea, one that any of us could have thought of, but it took someone like Kevin Kennedy to come by and make it a reality. And now, we’ll see how successful it gets.

The fourth PITCH event will be held this Thursday, June 19 from 7 to 11 pm at 918 Bathurst Street in downtown Toronto. PITCH #4 will feature Grantland’s Jonah Keri, Sportsnet’s Michael Grange, theScore and Drunk Jays Fans’ Andrew Stoeten, and the Toronto Star’s Morgan Campbell. Tickets are $15 and quantities are very limited.

Visit www.pitchtalks.ca for more information and videos of past PITCH events, including segments featuring Dan Shulman and Mike Wilner. On Twitter you can follow PITCH (@PitchTalks) and Kevin Kennedy (@KevinBKennedy).