After losing a tough game in the Bronx last night, the Blue Jays send staff ace Mark Buehrle to the mound against rookie Chase Whitley. The right-hander Whitley was a 15th round pick in the 2010 draft out of Troy University and was a reliever during almost all of his time in the minor leagues. It wasn't until this season that the Yankees made Whitley a starter and he responded by posting a 2.39 ERA in AAA Scranton/Wilkes-Barre. After CC Sabathia went down with an injury the Yankees called up Whitley and he's continued to surprise at the major league level. While he doesn't have dominating stuff, the Alabama native pounds the strike zone and limits his walks as well as always having a knack for keeping the ball in the ballpark. In fact, Whitley has gone four straight starts with New York without surrendering a single walk, which shows the type of control he has.

Whitley's stuff is pretty basic, sticking to fastballs, sinkers,  sliders, and changeups with the hard stuff sticking in the low 90's and his off-speed pitches hanging around the 85 mph marks. This means that the pitches he throws are going to come in at one of two speeds: 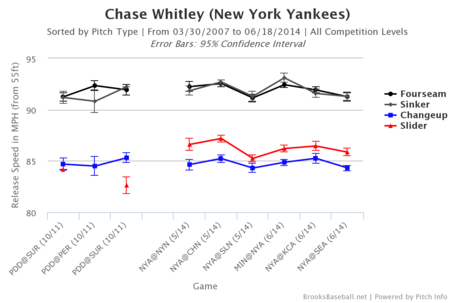 The location of his pitches is something that's pretty easy to see graphically with the changeup staying low and arm-side, while the slider fades low glove-side. The fastballs are usually up in the zone, which might cause problems for Colby Rasmus in his return to the Blue Jays lineup tonight.

This bench is getting really bad again.

Find the link between Chase Whitley and the first non-cornerback defensive player picked in the 2005 NFL Draft.

Chase Whitley and Mark Buehrle are going to pound the strike zone forcing the hitters to be aggressive.