Share All sharing options for: Brett Lawrie hurts hand as Blue Jays lose to Brian McCann and the Yankees 7-3

The Blue Jays went into game two of this series looking to even up the series but good Yankees pitching shut down the Jays' offence and timely Brian McCann hitting led New York to a 7-3 victory. But possibly more costly than the loss was an injury to Brett Lawrie, leaving the second and third baseman "day-to-day."

Yankees starter Chase Whitley went through the first three innings only allowing two singles. Jose Bautista led off the fourth with a single before Edwin Encarnacion replaced him at first on a fielder's choice. Brett Lawrie then got on base in a more painful way, getting hit on the back of his left hand (the same hand he broke back in 2011) by an 83 mph change up, not being able to turn away fast enough. He looked to be in deep pain, but managed to stay in the game to run the bases. After a Juan Francisco strike out, Dioner Navarro singled on a Whitley changeup to score Encarnacion. Then the just-activated Colby Rasmus followed up with his own RBI-single to score Lawrie, who even slid into home plate to give Toronto a 2-1 lead.

Lawrie did appear on the field for the bottom of the fourth inning, but had no fielding opportunities. Steve Tolleson came in as a defensive replacement in the bottom of the fifth, although he was already on the on-deck circle for Lawrie in the top half of that inning. The good news for the Blue Jays is that Lawrie's X-rays came back negative, so he joins the growing list of "day-to-day" players on the 25-man roster. At least it is better than falling down a well.

Back to the game, Mark Buehrle and Yankee Stadium were not able to hold the one-run lead. After a leadoff single by Carlos Beltran that went just over Jose Reyes's reach, Brian McCann hit a shallow fly ball that landed into the second row of seats beyond the left field wall, some 348 feet from home plate. Of course, right before the home run Buck Martinez was talking about how easy it was to hit a home run out that way.

Buehrle completed six innings with 103 pitches, having given up two earned runs on six hits and two walks. His lone unearned run came in the first, when a dropped ball by Lawrie at third eventually led to an Alfonso Soriano RBI-single.

Toronto was still very much in the game heading into the bottom of the seventh, just down by a run. John Gibbons tapped Chad Jenkins to face the top of the Yankees lineup for some reason. Jenkins did not look good, allowing the Yankees to load the bases with three singles before Brett Cecil came in to walk Ichiro Suzuki to make it 4-1. The Blue Jays have already issued seven bases loaded walks this year, compared to 11 all last year.

But wait, they weren't done! Everyone's favourite fun-loving catcher Brian McCann came back up to the dish and tripled jussssssst past the diving Rasmus to make it 7-2: 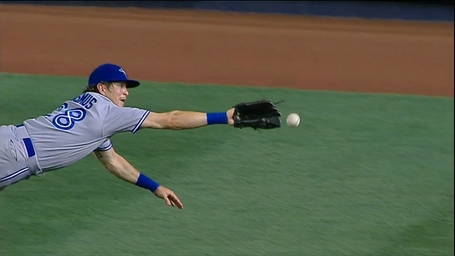 The Blue Jays started a rally in the eighth inning. Melky Cabrera started it off with a double to the right field wall, then Bautista knocked him in with a double down the right field foul line for his 1000th career hit. But then Joe Girardi put in Dellin Betances for a second night in a row. Betances iced the rally by first striking out Encarnacion looking with a naaaasssssty curveball then getting Tolleson to pop out into foul territory then striking out Dioner Navarro swinging. It didn't look like Navarro went around, but hey, the umpires have to show some respect for Yankee Stadium.

Closer David Robertson, who was brought in even though the Yankees held a four-run lead, finished the game with a 1-2-3 ninth. I guess the good news for the Jays is that Robertson and Betances are probably unavailable for the game tomorrow. With eight strikeouts tonight, the Blue Jays have now struck out 23 times so far this series (out of the 54 outs they've made). 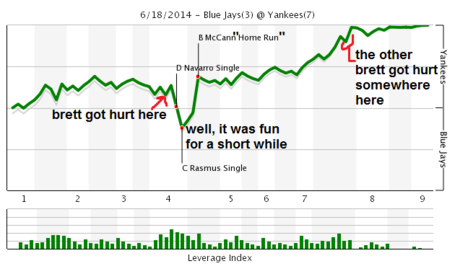 Everyone in the AL East won except for the Jays and the Rays, so Toronto, now just nine games above .500, is just 2.5 games ahead of New York and 3 games ahead of Baltimore. The Jays send Drew Hutchison out on the mound (yay, away game for Hutch!) against David Phelps tomorrow night at 7 pm looking to not extend their winless streak in Yankee Stadium to 16.