The Blue Jays are going try to salvage something tonight in the final game of this dreadful series. As everyone now knows, the Jays have lost 15 straight games at Yankee Stadium which borders on ridiculous. If they want to snap the streak they'll have to do it against part-time starter/part-time reliever David "my name is not Michael" Phelps. Toronto will have Drew Hutchison on the mound who is making his Yankee Stadium debut just like Marcus Stroman did two nights ago. Phelps started the season as a reliever, but after all the rotation injuries to the Yankees he was thrust into a starters role, which is something that's happened in each of the past three seasons. In his 8 starts this season he has a 4.44 ERA, with rough starts in June against Kansas City and Seattle really inflating his numbers.

Phelps, a righty, throws a fastball, sinker, cutter, curveball, and changeup with the fastballs hanging in the low-90's. He's actually pretty similar to the pitcher the Blue Jays faced last night in Chase Whitley with a curveball instead of Whitley's slider. The answer to the "Find The Link" today is that David Phelps and Derek Holland were born on the exact same day (we'll see who reads these previews without cheating!). Phelps' changeup can actually have more arm-side movement than his sinker at times so that's a little impressive: 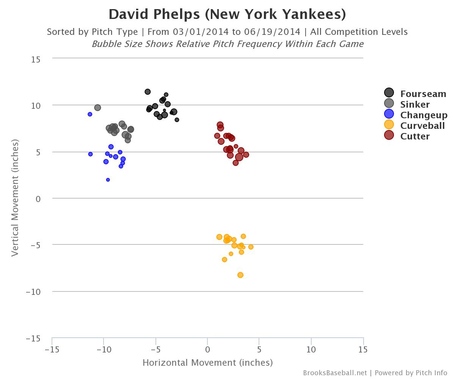 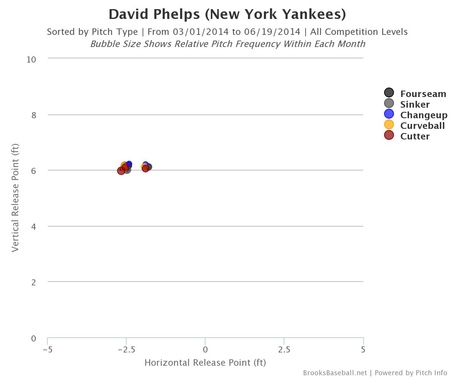 Who's hurt? Who's not? Nobody knows!

Find the link between David Phelps and the most famous Olympic swimmer of recent history.

If the Blue Jays want to snap their winless Yankee Stadium streak, facing David Phelps is as good a chance as any.