The Blue Jays get their interleague on tonight in Ohio when they face off against the Reds of Cincinnati. As we now know, Liam Hendriks will be called up to make the start against righty Mat Latos. The last time the Blue Jays played at Great American Ball Park was mid-June 2011, where they won the series two games to one. The Reds sit at 35-36 currently, which is good enough for 7.5 games back of Milwaukee in the National League Central. They're a pretty fun team to watch with Billy Hamilton in centre field, Joey Votto and Brandon Phillips roaming the infield not to mention Aroldis Chapman coming out of the bullpen: 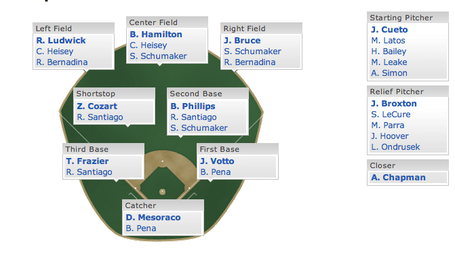 Mat Latos came to Cincinnati in the Edinson Volquez deal with San Diego three years ago and has been pretty solid during his time in Ohio. After offseason surgery on his elbow and knee, Latos only returned to the Reds rotation six days ago in a six-inning outing with no earned runs allowed against the Brewers. As an 11th round draft pick, Latos has done a fantastic job of performing in the major leagues and should net himself a big free agent contract at the end of the 2015 season.

Latos throws a fastball and sinker both in the 93 mph range, while mixing in a curveball and slider as well. He's an imposing figure at 6'6" and throws from an extremely high arm angle:

This high arm slot leads to a lot of vertical movement, but not a lot of the horizontal variety: 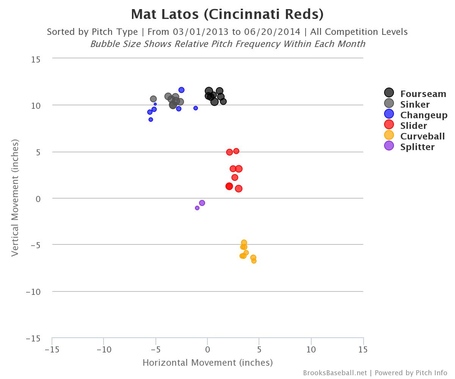 It's also hard to ignore that the majority of Latos' pitches are located down and away against right-handed hitters, which always seems to be a pretty effective strategy against the likes of Edwin Encarnacion and Jose Bautista. 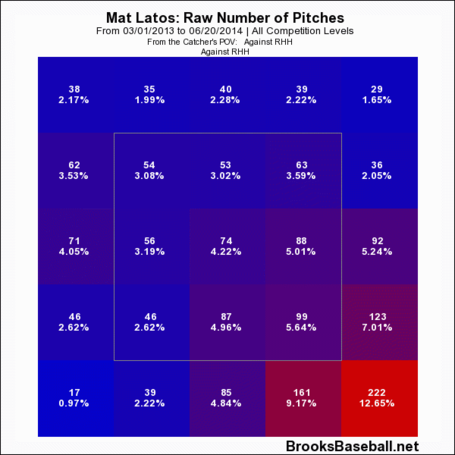 Pitchers get to hit! Prepare the double switches!

Find the link between Mat Latos and the insects of the superfamily Papilionoidea.

JaysfanDL suggested this section and I think it might be more fun than "Game in a Sentence".
I have a gut feeling that: