Share All sharing options for: The Reds led the Blue Jays 8-0. You won't believe what happened next. (Hint: Toronto won 14-9)

Confession: I did not watch the Blue Jays-Reds game until the seventh inning so I'll just summarize the innings one through six as follows:

It was eight-nothing Cincinnati after the second inning.  The Blue Jays ended up winning fourteen-nine. The second biggest comeback in franchise history.

When Jose Reyes grounded out for the first out of the top of the third, the Reds had a 98.9% win expectancy. There's not much difference between 98.9% and 100%, but there was enough of a difference for the Blue Jays' bats to strike back.

Before I turned on MLB.tv in the seventh, the Blue Jays already had started their slow climb out from the early deficit. Edwin Encarnacion hit his 22nd home run as a three-run varity in the top of the third. Then Adam Lind singled in the top of the sixth to bring home Munenori Kawasaki, followed by a bases-loaded walk for Jose Bautista. I believe that is the third straight game that the Blue Jays have seen a bases-loaded walk (Brett Cecil walked in a run on Wednesday, Steve Delabar walked in a run Thursday, both against the Yankees). Bautista actually tied the franchise record (and his career record) for base on balls in a game by walking four times in the game.

In the top of the seventh, with the Reds up 9-5, manager Bryan Price brought in career minor leaguer Jumbo Diaz (great name) for his major league debut. Diaz retired the less rotund Dioner Navaro for the first out, but then Brett Lawrie and used the small Cincinnati park to hit an opposite-field homer. Later in the inning, Munenori Kawasaki worked a ten-pitch at bat against Diaz and singled right up the middle. Former Red Juan Francisco came up next and homered to right, fair just by a few feet. The game was 9-8.

Sergio Santos came out for the bottom half of that inning. After getting two quick outs, Devin Mesoraco doubled to bring up Skip Schumaker. Schumaker hit a 1-2 pitch to the right of the second baseman, but Kawasaki lassoed the ball in and threw him out at first, saving a precious run for Toronto.

The next inning, Jonathan Broxton gave up a leadoff walk to Melky Cabrera, but then Bautista grounded into a double play, decreasing the Jays' win probability by 17.6% on that play. But then Encarnacion worked a walk. He was followed by Navarro, who doubled to the gap to tie the game 9-9.

Dustin McGowan came on and shut down the Reds 1-2-3. He wanted to get his hitters back up to the plate.

Predictably, Aroldis Chapman, the Reds' closer, was brought in. Even though he hit 100 mph he wasn't able to locate his fireball against Colby Rasmus, who took a walk. Kawasaki was up next and put down a very well-placed sacrifce bunt down the third base line to allow Rasmus to advance. Erik Kratz, who once hit a homer off of Chapman, was put into he game as part of a double switch. He immediately rewarded John Gibbons for doing so by doubling to score the go-ahead (and eventually winning-) run. The Blue Jays would score four more that inning, on a Cabrera single and then Encarnacion's second three-run home run of the night to make it 14-9.

Gibbons didn't want to take any chances, so he brought out closer Casey Janssen for the ninth (he needed work anyway). And Janssen did the job with a perfect inning. 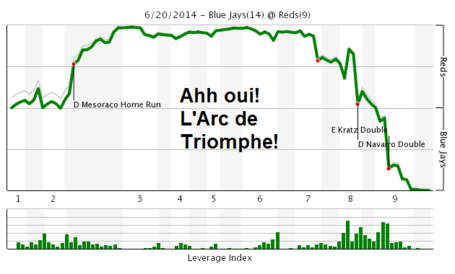 Jays of the Day! Kratz (+.310 WPA), Navarro (+.277), Cabrera (+.157), Francisco (+.149), McGowan (+.098) had the numbers. Encarnacion (2-for-5, BB, 2 HR, 6 RBI) only had a .021 WPA but how do you not give him a JoD. John Gibbons, for managing the bullpen, using two pitchers as pinch runners, putting in Francisco against the fastball-throwing Diaz, and putting in Kratz on a double switch gets a JoD too. So does every Blue Jays fan who sat through the entire game (so I don't get one...). Bowing Guy would like to give a special shout out to Spor, who maintained his positivity during the game thread!

Todd Redmond gave the Jays three innings out of much-needed relief, and Santos, Chad Jenkins, and Janssen each came out with scoreless outings in relief, but I won't give them JoDs, just this mention. Kawasaki (-.027) gets a mention too, for a stellar defensive play at a key time, grinding out his plate appearances, and his sac bunt, but he did make that error earlier in the game, so no JoD for him.

After the game, the Blue Jays announced that Liam Hendriks, who went 1.2 innings giving up six runs on six hits, was returned to the Bisons in favour of Rob Rasmussen. The Hendriks move was made in-game, as reported hours ago by our Buffalo correspondent, Julian Santiago, who was in a scrum with Alex Anthpoulos at Coca-Cola FIeld.