The rubber match from Great American Ball Park today at 1:10 pm sees R.A. Dickey take the mound against Johnny Cueto. The right-handed Reds pitcher is criminally underrated thanks to playing in the small market of Cincinnati, although there is likely a big time free agent move in his future after 2015 (assuming the $10 million option next year isn't declined by the Reds).

In 2014, Cueto has started 15 games and currently sits at an ERA of 1.92 (the lowest ERA in the league) with a FIP of 2.85 thanks to a BABIP of .212. He's boosted his K-rate to  26.8% and limited his home runs allowed, which should give the Reds hope that the success can be sustained. Although he's not widely considered as one of the best pitchers in the National League, Cueto has posted a sub-3.00 ERA in every season since 2011.

The Dominican features a ton of pitches including a fastball, sinker, slider, changeup, cutter, and curveball. The mid-90's fastballs set up his mid-80's changeup and slider well, with the cutter actually being his go-to off-speed pitch this year. His changeup has always been considered an effective pitch thanks to its similarity in delivery to his fastball and the amount of fade on the pitch as displayed in the chart and GIF below: 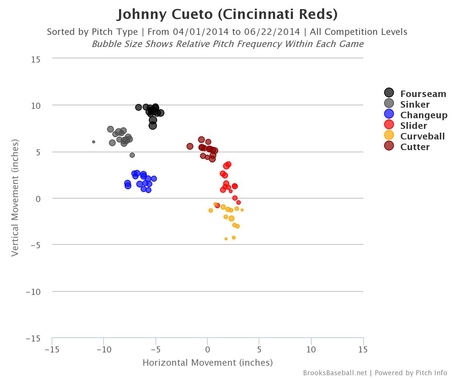 With Josh Thole having to catch R.A. Dickey, the bottom third of the lineup is pretty ugly not to mention lefty-heavy.

Find the link between Johnny Cueto and the Fall 2013 winner of Dancing with the Stars.