Anthony Gose Keeps Putting Himself in a Hole

Anthony Gose has hit better than expected in 2014, but he's doing it hitting from behind in the count.

Share All sharing options for: Anthony Gose Keeps Putting Himself in a Hole

Anthony Gose is not a good major league hitter.

Technically one should add a "yet" to the end of that sentence as Gose is certainly young enough to improve. However, it's also fair to say that Gose's trademark skill is unlikely to ever be his bat.

While Gose's production at the plate may come down a notch (his .361 BABIP seems a bit much even for a guy with his wheels) he continues to be a solid option as a reserve and/or replacement outfielder and a nice piece to have around. He's not a player that the Jays should trade Colby Rasmus away to make room for—as some of the lunatic fringe of the Jays fan base were suggesting earlier this year—but he's undoubtedly a good guy to have.

That being said, if Gose is ever going for go from a nifty reserve to a guy worthy of starting regularly his bat will need to improve. That much is obvious. However, it's not entirely obvious how that would happen, and there is no indication that it will ever happen. The combination of very little power and a relative inability to make contact is a pretty poor foundation for building a productive hitter, and that's the foundation that Gose is building on.

If you are going to strike out a lot, and not hit the ball out much, you're going to need to work some walks in order to be offensively valuable. To Gose's credit he has done that. In his young MLB career he has a respectable walk rate (8.6%) and so far this year he has a robust BB% of 13.9%.

However, Gose's approach may not be conducive to maintaining his healthy walk rate. His rate of swinging at balls outside the zone is about average this season (29.4%) and for his career (28.6%), indicating his discipline may not be as strong as his BB% suggests. Additionally, Gose has a serious problem falling behind in the count. The following chart shows the players (with at least 100 PA) with the highest first strike percentage against in 2014:

While strike one might not be as important as we sometimes think, that is not a good leaderboard to be at the top of. It's also not a new issue. In his career so far Gose has a first strike percentage of 66.7%. What's worse is how poorly Gose has done when he falls behind 0-1:

Most hitters do poorly down 0-1, the league wRC+ through 0-1 is usually in the neighbourhood of 85, but Anthony Gose has been especially bad.

Some of this isn't under Gose's control. Clearly pitchers also play a role in whether the first pitch is a strike or not. Also, if the young outfielder is going to rely on walks to be valuable he'll need to take some pitches, even if they are strikes.

Even so, Gose is not completely powerless to prevent himself from going down 0-1. He has swung a fair amount at the first pitch in his career, probably too much for his own good. 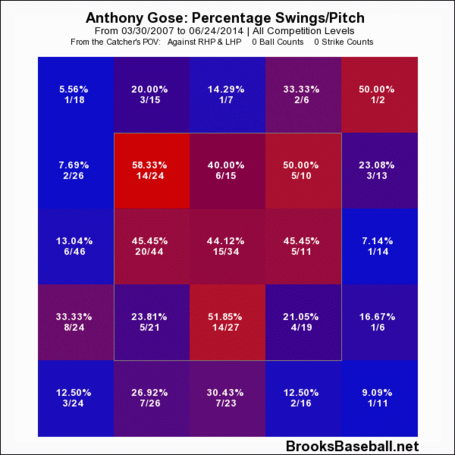 For many hitters it is wise to swing at the first pitch. After all, Carlos Gomez seems to be doing pretty well with that strategy. For Gose it's probably wiser to lay off. He doesn't have the power to cause serious damage and isn't a good enough hitter to fight back effectively when down in the count.

At this very moment Anthony Gose is a useful player. If he wants to be a useful hitter he has a ways to go. One of the ways to get there might be to take a few more first pitches.

Some players can be effective almost regardless of what count they find themselves in. So far in Gose's young career he is not one of those guys. There is little to indicate that he has the hitting chops to be one of the guys.

If he wants to succeed at the plate he'll need to get in good hitter's counts consistently. That's not 100% within his control, sometimes good pitching is going to bury him in a bad count , and sometimes it has.

Other times Gose has done it to himself, and if he is going to be a passable hitter at this level he can't afford to let that happen.