The Blue Jays tangle with the White Sox for the first time this season as they kick off a quaint little four-game set this weekend. Chicago sits at the bottom of the American League Central with a 36-43 record and little hope of challenging for anything more than a .500 record at the end of the year. Despite not being very good, players like Jose Abreu, Alexi Ramirez, and Conor Gillaspie are having solid years offensively for the South Siders so there's a little bit of hope for the future. Here's how they line up defensively: 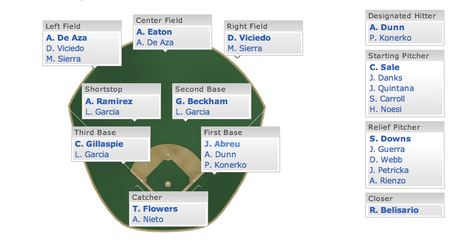 Not exactly a show stopping pitching matchup tonight, as J.A. Happ goes up against righty Scott Carroll. Who is this Scott Carroll we speak of? Based on my username you may have guessed the answer is yours truly. I'm not going to say either way, but I'm writing this preview early because I have to be at the Rogers Centre for a big....evening tonight. South Side Sox provides the real answer:

Carroll is a pitch-to-contact, low strikeout rate, meh walk rate pitcher. He has always done a good job of keeping the ball on the ground. His repertoire is pretty unremarkable. As you'd expect from a guy who gets grounders, he throws his sinker a lot. His other fastball is the classic four-seamer. Both are 90 MPHish.  His breaking ball is a slow curve and his off-speed pitch looks like a splitter to me. He probably can throw a slider, too.

Scott Carroll is your usual AAAA sinkerballer. He lost his rotation spot, but got it back by adding a cutter and pitching well out of the bullpen.

Drafted in the third round of the 2007 draft, Carroll has been minor league filler for a while and got his first chance in the majors this year. He's done okay, but will always rely on some good fortune to make his numbers look better than they deserve to be. He pretty much just throws his sinker in the low-90's with a curveball mixed in a little bit. He occasionally throws some other pitches into the mix as you can see below, but they're not too imposing: 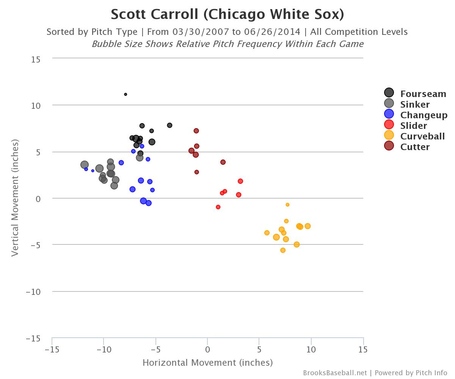 Find the link between Scott Carroll and the man who was swapped for the Jays Canadian third baseman.